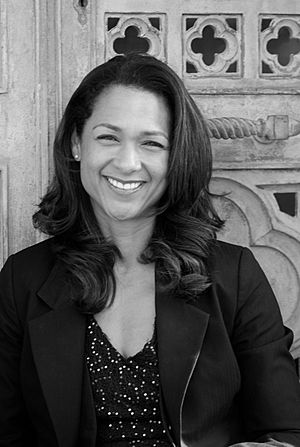 Aimee Allison (born 1969) is a political activist. Aimee Allison is working for equality. She is President of Democracy in Color and founder of She the People.

Growing up, Allison admired her parents. Her mother was a civil rights activist. Her father was a scientist. She was inspired by her parents to get into political activism. When Allison was 17 years old, she joined the army. After being a soldier in the first Gulf War, she realized that she did not agree with fighting wars. Allison became a "conscientious objector," someone who is against war. Allison lives in Oakland, California, USA.

Allison went to college and studied history. She went to graduate school and studied education. She studied at Stanford University. In 2006, Allison was elected to the Oakland city council. By 2016 she had two degrees and had co-authored a book about the military and war.

All content from Kiddle encyclopedia articles (including the article images and facts) can be freely used under Attribution-ShareAlike license, unless stated otherwise. Cite this article:
Aimee Allison Facts for Kids. Kiddle Encyclopedia.