Akeelah and the Bee facts for kids

The film was developed over a period of 10 years by Atchison, who came up with the initial concept after seeing the 1994 Scripps National Spelling Bee and noting that a majority of the competitors came from well-off socioeconomic backgrounds. After completing the script in 1999, Atchison won one of the Nicholl Fellowships in Screenwriting in 2000, which attracted producers Sid Ganis and Nancy Hult Ganis. After an initial inability to secure funding, the project got a second wind as a result of the success of the 2002 documentary film Spellbound. Lionsgate Films undertook the production in 2004 and in the following year it was filmed in South Los Angeles on a budget of over $6 million.

Atchison remarked that his theme for the film, deemed an inspirational film, was about overcoming obstacles despite difficult challenges along the way. He also said that he wanted to portray African Americans in a manner that was not stereotypical and tried to show how African-American children incorporate some stereotypes. The film alludes to the importance of community as well as to problems black communities face. It also deals with esteem and stigma in school while criticizing the public school system. Cast members said that although the film was aimed at children, they considered it had important lessons for the parents as well.

Released in the United States on April 28, 2006, Akeelah and the Bee was positively received by critics and audiences. Reviewers praised its storyline and cast, lauding Palmer's performance, although a few critics panned the story as familiar and formulaic, and were critical of the portrayal of Asian-American characters. The film grossed $19 million, and received a number of awards and nominations, including the Black Reel Awards and the NAACP Image Awards. Film critics highly praised it for avoiding African-American stereotypes common in Hollywood films, while scholars were less favorable, even saying it reinforces some clichés.

Akeelah Anderson, an 11-year-old spelling enthusiast, attends Crenshaw Middle School, a predominantly black school in South Los Angeles. She lives with her widowed mother Tanya, her three older siblings, Kiana, Devon, and Terrence, and her unnamed infant niece. Her principal, Mr. Welch, suggests that she sign up for the Crenshaw Schoolwide Spelling Bee, which she initially refuses. After being threatened for detention for the remainder of the semester, she enters the spelling bee and wins. Soon after, Dr. Joshua Larabee, a visiting English professor, tests Akeelah and decides that she is good enough to compete in the National Spelling Bee. Nevertheless, Dr. Larabee declines to coach her because she is rude to him. As a result, Akeelah studies on her own to prepare for the district spelling bee. Although Akeelah misspells her word during the final round of the bee, she qualifies for the regional bee when Kiana catches the other finalist cheating. Akeelah also meets and befriends Javier Mendez, a 12-year-old Mexican American boy and fellow speller. Javier invites her to join the spelling club at his Woodland Hills middle school.

At Woodland Hills, Akeelah meets Dylan Chiu, a Chinese American boy who won second place at the past two national spelling bees. Contemptuous after Akeelah misspells a word, he tells her she needs a coach. After, Javier invites Akeelah to his birthday party, while Tanya is depressed over Terrence's bad behavior, Akeelah's grades and frequent truancy, and her husband's death (after a mugger shot him on his way home from work five years ago). As she finds out about Akeelah going alone to Woodland Hills, she forbids Akeelah from participating in the upcoming state bee and forces her to take summer school to make up for all the classes she skipped. To circumvent this prohibition, Akeelah forges her deceased father's signature on the consent form and secretly studies with Dr. Larabee. At the party, Akeelah nearly beats Dylan in Scrabble. Afterwards, Akeelah overhears Dylan's overly competitive father insulting her and berating his son for nearly losing to "a little black girl". During the state bee, Tanya comes inside and interrupts her daughter before she can spell her word. Tanya chastises Akeelah for going to the bee without her permission but relents after a side discussion with Dr. Larabee and Mr. Welch. Javier protects Akeelah from disqualification by stalling until she can return. Dylan, Javier and Akeelah advance to the Scripps National Spelling Bee.

As Christmas approaches, Akeelah goes out to buy Dr. Larabee a present, but when she meets him, he reveals that he is quitting being her coach because she reminds him of his deceased daughter, Denise; she died of an unexpected terminal illness when she was younger than Akeelah. Instead, Dr. Larabee gives Akeelah 5,000 flashcards to study. Without her coach, rejected by her best friend Georgia, and feeling the pressure from her neighborhood residents to make them proud, Akeelah loses her motivation. However, Tanya tells her that if she looked around her, she would realize that she has "50,000 coaches". Akeelah recruits her family members, classmates, teachers, friends, and neighbors to prepare in earnest. After reuniting with Dr. Larabee, Akeelah goes to Washington, D.C. with him, along with Tanya, Georgia, Mr. Welch, and Devon, unaware that her coach has paid for four of their tickets. Georgia rekindles her friendship with Akeelah after she invites her. During the competition, Akeelah becomes a crowd favorite. After all the other competitors are eliminated, only Dylan and Akeelah remain. The two finalists are allowed a break, during which Akeelah overhears Dylan's father harshly pressuring him to win, so Akeelah attempts to intentionally lose. Dylan, fed up with his father's competitiveness, intentionally misspells it as well. Dylan tells Akeelah that he wants a fair competition. The two then proceed to spell every word listed by the judges until the two are declared co-champions. 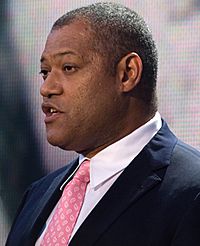 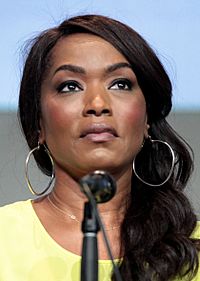 Three hundred girls auditioned for the role of Akeelah in Los Angeles, New York and Atlanta, with Palmer having auditioned five times to get the part. Atchison liked Palmer's acting, but the major factor in choosing her was the fact that at only age ten Palmer already had a profound interpretation of the script. He chose her as he did not want a kid whom he would command but instead someone with whom he could have a collaboration: someone who would understand the role and "would make this character her own." He just assisted her to fully ensure that she would understand the character's feelings and would make "the right emotional choices."

Fishburne was pleased by the concept of the film, stating he was "really moved by it", so that he accepted to take his part "at an affordable rate", according to producer Michael Romersa. He first read the script in 2002 and moved by the fact that "there were very few people with the courage" to "make this kind of movie" he also accepted to be a producer for the film. About the character, Atchison said that Larabee is "vulnerable" and "a very sensitive guy" that has "a quiet moral authority". He also asserted that Fishburne made Larabee "a fairly buttoned-up, stoic type" and "subtly more animated" than how he envisioned the character. Larabee is based upon a teacher, Robert Larabell, Atchison had in Phoenix, Arizona.

Bassett's agent sent her the script which she "just loved." Atchison praised Bassett's portrayal of the character, asserting she "made Tanya a real person" after understanding "the thought process of the character". The director said Tanya wants the best for Akeelah but is reticent because she thinks "the dream will fail and make things worse." Bassett stressed that her character has to handle the pain of her husband's death in addition to having bills paid but that Tanya "gain[s] some measure of courage herself" inspired by Akeelah.

Atchison pointed Armstrong "was the perfect choice for the school principal." About his character role in the film, he said, "Welch is very excitable and provides a lot of the comic relief in our story."

Villarreal was chosen by scouts at the Sheraton Hotel in south McAllen to go to the next phase in Dallas. After doing well in Dallas, he was sent to auditions in California and finally got the part. He commented that "Javier is a very good friend to Akeelah ... And also like his charisma, his character, he can always put a smile on your face. He really doesn't care what people think of him that much and he helps Akeelah out with that little matter because she cares very much what people think about her."

Afable argued that his character can be "sometimes harsh and seemingly cutthroat", but this is because of the pressure his father puts on him, noting Dylan's "true character" is seen at the end of the film.

All content from Kiddle encyclopedia articles (including the article images and facts) can be freely used under Attribution-ShareAlike license, unless stated otherwise. Cite this article:
Akeelah and the Bee Facts for Kids. Kiddle Encyclopedia.