Alba is a town located at the intersection of U.S. Highway 69 and Farm To Market Road 17 on the western edge of Wood County, Texas south of Lake Fork and approximately ten miles west of Quitman. The population was 504 in the 2010 U.S. Census.

A gunsmith named Joseph Simpkins was likely the first to settle the area, arriving here with his family from Missouri around 1843. The area was previously alternately known as Albia and Simpkins' Prairie. Theories on how the community got its name differ; one claims it was because the town had been intended for white settlers only while another claims it was named for the son of a railroad official.

Coming of the Railroads

The Missouri, Kansas and Texas Railroad came through Alba in 1881. One of the earliest shipments to Alba is reported to have been a telegraph office and, reportedly one of the first telegraphs received told details of the assassination of President James Garfield.

Later that year, Alba also received a post office. It closed briefly in 1882 but reopened that same year.

A lignite coal deposit was discovered near Alba around 1900 and in 1902 and 1903, the Texas Short Line Railway was constructed to ship coal from Alba and nearby Hoyt to Grand Saline in Van Zandt County. By 1911, five area mines produced about 40,000 tons of coal per month. Population was around 1,50 by this year.

The Alba Oilfield was discovered just south of Alba in 1848 by F.R. Jackson.

During it history, Alba has had two newspapers: the Alba Herald and the Alba Reporter. 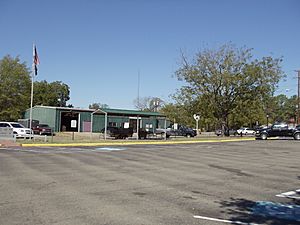 According to the United States Census Bureau, the town has a total area of 1.1 square miles (2.9 km²), all land.

There were 196 households out of which 23.5% had children under the age of 18 living with them, 46.9% were married couples living together, 11.7% had a female householder with no husband present, and 39.3% were non-families. 35.7% of all households were made up of individuals and 20.4% had someone living alone who was 65 years of age or older. The average household size was 2.19 and the average family size was 2.85.

All content from Kiddle encyclopedia articles (including the article images and facts) can be freely used under Attribution-ShareAlike license, unless stated otherwise. Cite this article:
Alba, Texas Facts for Kids. Kiddle Encyclopedia.