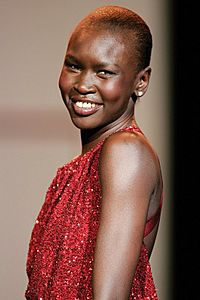 Alek Wek (born 16 April 1977) is a South Sudanese-British model and designer. She began her fashion career at the age of 18 in 1995. She has been praised for her influence on the perception of beauty in the fashion industry.

Wek was born in Wau, Sudan (now South Sudan). She is from the Dinka ethnic group. She fled to Britain in 1991 to escape the civil war in Sudan. As of 2009, she lives in Brooklyn, New York, United States.

All content from Kiddle encyclopedia articles (including the article images and facts) can be freely used under Attribution-ShareAlike license, unless stated otherwise. Cite this article:
Alek Wek Facts for Kids. Kiddle Encyclopedia.