Kids Encyclopedia Facts
For his father, the U. S. Representative and lawyer, see Alexander Holladay. 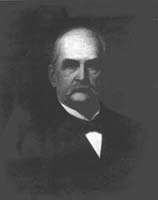 During the Civil War, Holladay was an officer of the Confederate States Army, rising to the rank of Colonel. For the remainder of his life he was commonly called "Colonel Holladay".

The son of Alexander Richmond Holladay (1811–1877), a lawyer and former U. S. Representative, by his marriage to Patsy Quarles Poindexter, Holladay was born in Cherry Grove, Virginia. He was educated, like his father, at the University of Virginia (1857–1859) and then at the University of Berlin (1859–1861) where he specialized in Latin, Greek, moral philosophy, and law. While at Charlottesville, he was a member of the Beta Theta Pi fraternity. On April 17, 1861, a few days after the outbreak of the Civil War, Holladay married Virginia Randolph Bolling, a daughter of Thomas Bolling of Bolling Island, in the upper James River in Goochland County, Virginia. On May 25, 1861, he was commissioned into the Confederate States Army. The Holladays' daughter Mary Stuart Holladay was born on February 3, 1862, their son William Waller Holladay on September 7, 1864, and their daughter Julia Cabell Holladay in 1868. They had two further sons, Alexander Randolph Holladay (March 12, 1870), and Charles Bolling Holladay, (February 12, 1873).

During the four years of the Civil War, Holladay rose from Second Lieutenant to Colonel. After the war ended in 1865, he studied law and went on to practice in partnership with his father between 1870 and 1877 (Holladay, White and Holladay). During that period, he served in the Virginia State Senate as senator for Richmond, from 1871 to 1875. He taught in Richmond for a while before becoming president of the Stonewall Jackson Institute in Abingdon, Virginia. From 1885 to 1888, he was president of the Florida State Agricultural College in Lake City, Florida.

In the year 1888–89, F. L. Kern served as President of the college, while Holladay remained, his name appearing thus: "Col. A. Q. Holladay (of the Universities of Virginia and Berlin), Professor of History, English Literature, and Latin."

In 1889, the North Carolina College of Agriculture and Mechanical Arts Board of Trustees appointed Holladay the first chief executive of the college, which later developed into the North Carolina State University. Holladay originally applied for the position of professor of English of the new college. Holladay presided over approximately fifty students during the 1889–1890 academic year.

After his retirement in 1899, Holladay spent time in Delaware, New York, and Virginia until failing health brought him back to his daughter's home in Raleigh, North Carolina, where he lived until he died and was buried at Raleigh in 1909. NCSU Libraries Special Collections Research Center serves as the repository for Alexander Holladay's manuscript collection.

Holladay's mother was a niece of George Poindexter (1779–1853), who from 1820 to 1822 had served as the second Governor of Mississippi. He was also related to Lewis Littlepage (1762–1802), the half-brother of Holladay's grandfather, Waller Holladay (1776–1860). Littlepage had a remarkable career as a diplomat in the service of the last Polish king, Stanisław August Poniatowski, and the Russian Empire.

All content from Kiddle encyclopedia articles (including the article images and facts) can be freely used under Attribution-ShareAlike license, unless stated otherwise. Cite this article:
Alexander Q. Holladay Facts for Kids. Kiddle Encyclopedia.