Alexandru Iulian Maxim ( born 8 July 1990) is a Romanian professional footballer who plays as an attacking midfielder or winger for Turkish club Gaziantep F.K. and the Romania national team.

Maxim played youth football for Olimpia Piatra Neamț and Ardealul Cluj before joining Espanyol, making his debut as a professional for their reserve team. He returned to Romania with Pandurii Târgu Jiu, before transferring abroad again to VfB Stuttgart in 2013. After four and a half years with the club, he moved to Mainz 05.

Maxim has been a full international for Romania since 2012, earning over 40 caps.

Maxim started his football career with local side Olimpia Piatra Neamț when he was seven years old before joining Ardealul Cluj in 2004, sharing teams at some point with Mihai Răduț and Vlad Chiricheș.

Aged 17, Maxim moved to Spain with Espanyol. About his accommodation in the country, he said that "it was not very easy". After progressing through the club's academy, he then played for the reserves in the Segunda División B. During the 2010–11 campaign, Maxim was loaned to Badalona.

On 9 August 2011, Maxim returned to Romania to sign a one-year contract with the option of another two years for Pandurii Târgu Jiu.

Maxim made his debut in the Liga I on 12 September 2011, coming on as a late substitute in a 5–1 win over Mioveni, and scored his first goal for the club on 18 December in a 1–1 draw with Ceahlăul Piatra Neamț. He netted his second on 31 March 2012, in a 1–1 draw against Steaua București. Maxim later scored two more goals against Oțelul Galați and Concordia Chiajna respectively. Despite being absent on some occasions, Maxim finished his first season at the club with four goals in 28 appearances all competitions comprised.

The following campaign, Maxim aided Pandurii to a perfect start after scoring one each against Ceahlăul Piatra Neamț and Oțelul Galați, with the team having managed six wins in the first seven matches. By the time the first half of the season came to an end, he played 20 games and scored three more goals.

Maxim's good display attracted interest from several foreign clubs, including Standard Liège, and Steaua București was close to reaching and agreement for his transfer. In response to the initial rumours, head coach Petre Grigoraș stated that he expects the player to stay at Pandurii until the summer of the next year. 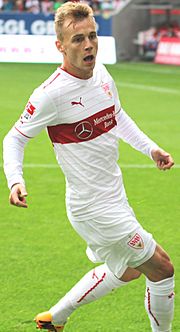 Maxim playing for VfB Stuttgart in 2013

On 31 January 2013, Maxim joined German side VfB Stuttgart for a transfer fee of €1.5 million, signing a four-and-a-half-year contract.

Maxim made his debut for Stuttgart on 14 February 2013, in a UEFA Europa League round of 32 game against Genk. On 23 February, he played his first Bundesliga match against Nürnberg. On 30 March, Maxim scored his first goal against defending champions Borussia Dortmund, to equalise in an eventual 2–1 loss due to Robert Lewandowski's late goal. Despite suffering an injury, Maxim made fourteen appearances in all competitions and played 62 minutes before being substituted in the final of the 2012–13 DFB-Pokal, which saw Stuttgart lose 3–2 to Bayern Munich.

On 1 September 2013, Maxim scored his first double for the club while also offering two assists in the 6–2 thrashing of Hoffenheim, to give Stuttgart the first Bundesliga win of the season after four match-days. He continued with his good form by scoring an assist in the next Bundesliga match against Hertha BSC in their 1–0 away victory. Maxim then scored again on 29 September 2013, in a 4–0 win over Eintracht Braunschweig and scored two weeks later on 20 October 2013, in a 3–3 draw against Hamburg. Coincidentally, Maxim scored twice against them for the second time this season on 8 March 2014 and two weeks later on 22 March 2014. He scored 9 goals in 26 matches in the 2013–14 Bundesliga, also contributing 11 assists.

In the 2014–15 season, Maxim started the season well when he scored the club's first goal of the season, in a 1–1 draw against Borussia Mönchengladbach. However, Maxim suffered an injury that kept him out for a week and after making his return, where he came on as a substitute in the second half, in a 3–3 draw against Bayer 04 Leverkusen, Maxim played the role in the next game, where he set up two goals, in a 5–4 win over Eintracht Frankfurt on 25 October 2014 and then in the second time meeting on 21 March 2015, he scored and set up one of the goals, in a 3–1 win. Despite suffering from another injury, Maxim made twenty–six appearance and scored two times, as well as, assisting six times in the 2014–15 season.

Ahead of the 2015–16 season, it was announced on 11 August 2015 that Maxim extended his contract with VfB Stuttgart until June 2019. The following month on 23 September 2015, Maxim scored his first goal of the season, in a 3–1 win over Hannover 96 and then scored his second goal of the season on 28 October 2015, in the second round of DFB-Pokal, in a 2–0 win over Carl Zeiss Jena. After suffering from an illness that kept him out for a week, Maxim set up two goals on 2 May 2016, in a 6–2 loss against Werder Bremen. After unable to help the club survive relegation to 2.Bundesliga, Maxim scored once in twenty–five league appearance and assisting six times in the 2015–16 season.

Following the club's relegation to 2. Bundesliga, Maxim was given a number 10 shirt from the previous 44 shirt and started the 2016–17 season well when he scored in the opening game of the season, with a 2–1 win over St. Pauli. On 30 October 2016, he scored again, in a 3–1 win over Karlsruher SC. After suffering from an injury for one game, Maxim then made his return from injury on 12 December 2016, where he came on as a substitute in the second half, in a 2–2 draw against Hannover 96. He finished strongly appearing as a regular starter and contributing three goals and one assist in the last matches of the season which helped secure Stuttgart's promotion to the Bundesliga.

In his four and a half years at the club, Maxim amassed 131 appearances with 17 goals and 35 assists across all competitions.

In June 2017, Maxim joined Mainz 05 on a four-year deal. The transfer fee paid to Stuttgart was in the region of €3 million plus bonuses. He made his competitive debut in a cup match against Lüneburger SK Hansa on 12 August, offering an assist in the 3–1 away win.

On 14 October 2017, Maxim scored his first goal for Mainz in a 3–2 league victory over Hamburger SV. 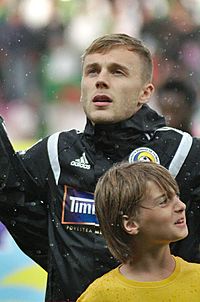 Maxim has stated that he wishes to represent his native country internationally, despite the possibility of taking up Spanish citizenship.

Maxim made his full international debut for the Romania on 30 May 2012, in a friendly game against Switzerland. On 11 September 2012, he became the very first Romanian player born after the Romanian Revolution to score for the national team, after a 4–0 win over Andorra. Two months later on 14 November 2012, Maxim scored again in a 2–1 victory against Belgium, but the match was later deemed unofficial according to the Laws of the Game (excessive number of substitutions).

It was not until 11 October 2015 when he scored his first goal in three years, in a 3–0 win over Faroe Islands. The following year, Maxim was included for the Romania squad for the UEFA Euro 2016. However, he was omitted from the squad after the final cut. In response to this, Maxim expressed his bitterness but nevertheless wished the team success in the tournament.

On 1 September 2017, Maxim netted the winner against Armenia at his first game under manager Christoph Daum.

In addition to his native Romanian, Maxim also speaks English, Spanish and German. He regarded Zinedine Zidane and compatriot Gheorghe Hagi as his role models growing up.

All content from Kiddle encyclopedia articles (including the article images and facts) can be freely used under Attribution-ShareAlike license, unless stated otherwise. Cite this article:
Alexandru Maxim Facts for Kids. Kiddle Encyclopedia.