Alexei Leonidovich Kudrin (Russian: Алексе́й Леони́дович Ку́дрин; IPA: [ɐlʲɪkˈsʲej lʲɪɐˈnʲidəvʲɪtɕ ˈkudrʲɪn]; born 12 October 1960) is a Russian liberal politician and economist serving as the 4th and current Chairman of the Accounts Chamber since 2018. Previously he served in the government of Russia as Minister of Finance from 18 May 2000 to 26 September 2011. After graduating with degrees in finance and economics, Kudrin worked in the administration of Saint Petersburg's liberal Mayor Anatoly Sobchak. In 1996, he started working in the Presidential Administration of Boris Yeltsin. He was appointed as Finance Minister on 28 May 2000 and held the post for 11 years, making him the longest-serving Finance Minister in post-Soviet Russia. In addition, he was Deputy Prime Minister from 2000 to 2004 and again beginning in 2007. As Finance Minister, Kudrin was widely credited with prudent fiscal management, commitment to tax and budget reform and championing the free market.

Under Kudrin, Russia's government paid most of the substantial foreign debt it had accumulated in the 1990s, leaving the country with one of the lowest foreign debts among major economies. Much of the revenue from exports was accumulated at the Stabilization Fund which helped Russia to come out of the 2008–2009 global financial crisis in a much better state than many experts expected. During his career, Kudrin has won several awards, including the "Finance Minister of the Year 2010" prize from Euromoney magazine. He was asked to resign from his position on 26 September 2011 by President Dmitry Medvedev.

Alexei Kudrin was born on 12 October 1960 in Dobele, Latvian SSR to Russian father and Latvian mother. His first job was a motor mechanic and training assistant at the engine laboratory of the Academy of Procurement and Transportation of the Defense Ministry of the Soviet Union, before entering Leningrad State University to study economy. He graduated in 1983, and got an internship at the Leningrad Institute of Social and Economic Problems. In December 1985, he entered the internal postgraduate school at the Institute of Economics of the Academy of Sciences of the Soviet Union, where he later received his PhD. He then worked as a researcher at the Institute of Social and Economic Problems of the Academy of Sciences. Kudrin has authored over 15 scientific works in the fields economics and finance, including topics such as competition and anti-monopoly policy in the Soviet economy of the transition period. 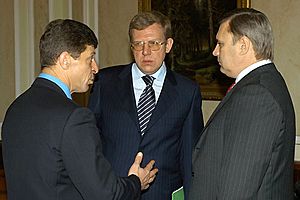 Kudrin served as finance minister from May 2000 to September 2011. Kudrin belongs to the group of so-called "St Petersburg economists"—liberal reformers who worked with Putin during his time in the St Petersburg administration—one of the three main informal groups during Putin's presidency. John P. Willerton regards Kudrin and German Gref as the leading intellectual forces in crafting of the economic policies of the Putin and Medvedev presidencies. According to Simon Pirani, Kudrin balanced the influence of the siloviki in the government with a financial sobriety. 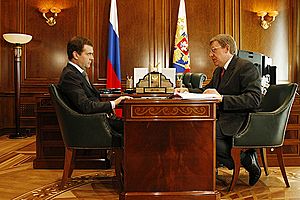 Kudrin meeting with President Dmitry Medvedev on 27 May 2008

In 2005, Kudrin and Prime Minister Mikhail Fradkov clashed over a proposal to cut VAT tax from 18% to 13%. Fradkov supported the proposal, but Kudrin argued that lower VAT could endanger stability of the ruble and would cause the government to withdraw money from the stabilization fund. The same year, Kudrin received the "Finance Minister of the Year 2005" award by the Banker magazine.

On 21 August 2006, Russia paid its debts, totalling $23.7 billion to the Paris Club. Simon Pirani, writing for Emerging Markets, praised Kudrin's refusal to be "blown off course by other ministers' whims" in his quest to repay the debt. He also credited Kudrin with sound conduct of the ruble exchange rate and capable fiscal management that has arguably helped to prevent the most serious problems of the so-called Dutch disease. In 2006, Kudrin received the award "Best Finance Minister of a Developing European Country" by the Emerging Markets newspaper, published by the IMF and the World Bank.

As the father and supporter of the prudent fiscal management policies, Kudrin had to endure strong criticism from other members of the government, who believed the money should instead be invested in the country's development. In the end, Kudrin's stance prevailed. The savings later proved crucial in helping Russia to come out of the financial crisis in a much better state than many experts had expected, and Kudrin was widely credited for his policies.

Although he has often spoken in favour of privatisation and lessening the state role in economy, Kudrin also supported the creation of the so-called national champions. Kudrin has said that the state's role in the oil industry should not be increased, and has indicated that the purchase of Sibneft by Gazprom and the merger of some former Yukos assets to state-controlled oil company Rosneft were taken at a particular stage of the restructuring of the sector. According to Kudrin, "no-one regards state ownership of such assets as an end in itself" and "we are not going to see a continuous strengthening of the state’s position."

As Finance Minister, Kudrin has also supported increasing the retirement age and cutting down on bureaucracy. For his policies, he has often been the target of criticism, especially from the United Russia party, which he has refused to join. According to Renaissance Capital, Kudrin's poll ratings are not favourable as he is seen as responsible for some highly criticized welfare reforms, although economic experts say that the reforms proved to be highly effective.

After the economic crisis

In the aftermath of the late 2000s global economic crisis, Russia's state budget went into deficit for the first time in years. Kudrin has said that the projected budget deficit is to total 3.6% in 2011, 3.1% in 2012 and 2.9% in 2013. The deficit will be covered primarily through expanded market borrowing. Russia conducted its first international debt sale since 1998 in April 2010, raising $5.5bn on the international markets. According to Kudrin, the government's aim is to attain a deficit-free budget by 2015, based on projected $75–78 oil prices per barrel. Kudrin has said that the Reserve Fund, accumulated before the crisis, will run out in 2011. Consequently, Kudrin warned that Russia will soon have to adjust to being a country, just "like everyone else" and called for a more effective use of state funds.

Finance Minister of the Year 2010

In October 2010, Kudrin was declared "Finance Minister of the Year 2010" by the Euromoney magazine. The magazine said that "Kudrin is rightly hailed as a fiscal manager of the highest order" and praised his "championing of the free market and fiscal prudence". According to Euromoney, the Stabilization Fund created and supported by Kudrin also "enabled Russia to pay off its foreign debt early", and noted that "Kudrin is rightly praised for his commitment to tax and budget reform, Russia’s desire to join the World Trade Organization (WTO) and continuing the progress in privatization."

In the award ceremony, Kudrin said: "Russia has already learnt this lesson; it was able to prepare and pass through this period. In this context, this is a result. And when you see your result, you feel satisfied. And when the result is praised by the professional community, it is especially important."

Kurdrin is the head of the Civil Initiatives Committee, a Non Governmental Organization which promotes Human Right and development of Civil society in Russia. At the opening of the All-Russian Civil Forum, organized by his Committee, Kudrin said the Law on non-governmental organizations - "foreign agents" should be abolished or completely reworded.

Kudrin said in November 2014 that "Formal and informal sanctions have already seriously impacted the Russian economy. Bringing back the previous opportunities when it comes to foreign investment and trust in the rouble can be achieved only within seven to 10 years of growth of our economy."

During his 2012 presidential campaign, businessman Mikhail Prokhorov said he would appoint Kudrin as Prime Minister, but, Prokhorov lost the election.

On 18 June 2015, Kudrin proposed to hold snap presidential elections. He justified this need for global reform and cited the example of the President of Kazakhstan Nursultan Nazarbayev, who did just that. State Duma deputy from the party A Just Russia Mikhail Emelyanov considered this statement Kudrin's entry into the presidential race. The next day, Kudrin said that he is not going to run for the presidency. However, many experts continued to believe that Kudrin wants to return to the Federal Government, and even take the place of the Prime Minister.

Chairman of the Accounts Chamber 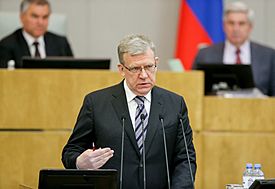 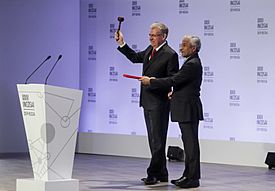 Kudrin during the inauguration of the President of the INTOSAI

After the 2018 Russian presidential election during the formation of the new government, Prime Minister Dmitry Medvedev nominated Chairwoman of the Accounts Chamber Tatyana Golikova as Deputy Prime Minister. On 10 May, the United Russia party proposed to nominate Kudrin to post of Chairman of the Accounts Chamber, instead of Golikova. This was the most anticipated nomination, as pundits observed that Kudrin's role in the new government would set the degree of reformative policies under Putin's fourth term. The low-importance of the position led some observers to speculate that this development signals that the new government has no sizable plans for economic reforms. On 11 May, the party leader Dmitry Medvedev agreed on the candidacy of Kudrin with the parliamentary faction. On 14 May, at a meeting with the Presidium of the faction, Kudrin officially agreed to nominate his candidacy. According to Russian legislation, the State Duma nominates at least three candidates for the post of Chairman of the Accounts Chamber, one of whom the President submits to the State Duma for approval. In addition to Kudrin, Anatoly Aksakov from A Just Russia, Yury Sinelshchikov from the Communist Party and Maxim Rokhmistrov from the Liberal Democratic Party also was nominated for this post. On 21 May, Vladimir Putin nominated Kudrin for the Chairman. On 22 May, State Duma approved Kudrin in office, with 264 votes in favor. On the same day, the speaker of the State Duma Vyacheslav Volodin introduced Kudrin to the members of the Accounts Chamber.

On 25 September 2019, Russia took over the presidency of the International Organization of Supreme Audit Institutions, and Kudrin took over as President of the organization.

Kudrin has been married twice, having a son from his current marriage and a daughter from his previous marriage. His hobbies include tennis, swimming and music.

All content from Kiddle encyclopedia articles (including the article images and facts) can be freely used under Attribution-ShareAlike license, unless stated otherwise. Cite this article:
Alexei Kudrin Facts for Kids. Kiddle Encyclopedia.