All Saints' Church in Wallgate, Wigan, Greater Manchester, England, is an Anglican parish church. It is in the deanery of Wigan, the archdeaconry of Warrington and the Diocese of Liverpool. The church is recorded in the National Heritage List for England as a designated Grade II* listed building, and stands on a hill in the centre of the town.

The oldest fabric in the church is to be found in the lower parts of the tower which date from the later part of the 13th century. The belfry stage was probably added in the 16th century. Between 1845 and 1850 the church was rebuilt, other than the tower, the north chapel, and two turrets between the chancel and the nave. The architects responsible were Sharpe and Paley of Lancaster. The total cost of this was £15,065 (equivalent to £1,240,000 as of 2021). In 1861 E. G. Paley, now working alone, added another stage to the tower including clock faces and pinnacles. The church was restored and its exterior partly re-faced in 1922. Further restorations and repairs have been carried out since then.

The church is constructed in sandstone. Its architectural style is Perpendicular, following the style of the church it replaced. The plan consists of a six-bay nave, a two-bay chancel, both of which have a clerestory, a south aisle with a porch at its west end, a north aisle with a two-bay chapel at the west end and a tower at its junction with the chancel, and a vestry to the north of the chancel. Between the nave and the chancel are the octagonal turrets remaining from the medieval church; these have crocketed caps. Along the sides of the church are embattled parapets and crocketed pinnacles. At the west end of the church is a six-light window, and the east window has seven lights. 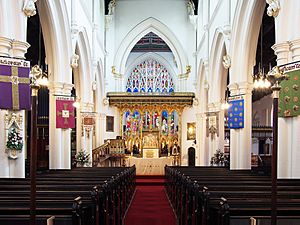 Inside the church are six-bay arcades carried on quatrefoil piers. The roof is coffered. There are corporation stalls of 1850. The reredos and pulpit were designed by Paley. The font has an octagonal bowl with a quatrefoil frieze and incorporates a fragment from the 14th or 15th century. The chancel screen of 1901 was designed by W. D. Caroe. Built into the splay of a north window is a Roman altar. The stained glass includes fragments in the north window dating from the 15th century, that were reassembled in 1956–57 under the direction of Eric Milner-White. Elsewhere are 19th-century windows by William Wailes, Heaton, Butler and Bayne, Hardman & Co., Lavers and Barraud, Clayton and Bell, and Burlison and Grylls. The monuments include a couple in the south chapel that are badly defaced. These are considered to be effigies of Sir William de Bradshaigh, who founded a chantry in the church in 1338, and his wife, Mabel. The female effigy was re-cut, and the male effigy was copied, by John Gibson in about 1850. There are also memorials to James Bankes, who died in 1689, and John Baldwin, who died in 1726. On the east wall of the chapel are marble monuments to the 23rd Earl of Crawford, who died in 1825, and his wife, and to the wife of the 24th Earl of Crawford who died in 1850. There is a ring of ten bells, all cast in 1935 by John Taylor & Co of Loughborough.

The earliest record of an organ is in 1620 when there was an organ on the screen between the chancel and the nave. A new instrument, built in 1623, was destroyed by Parliamentarian soldiers in 1643. In 1714 another organ was built in the same place, with a passage of twelve feet beneath it obstructing the view of the chancel. It remained in place until 1844, after which another was installed at the west end of the Leigh Chapel. This instrument was started by Richard Jackson of Liverpool, and finished by William Hill and Son of London. It was re-built by Hill in 1867, and sited under the tower. In 1877 the organ was moved to the eastern end of the Leigh Chapel. The main case, designed by Paley, dates from this time. In 1886 it was moved again to the western bay of the Leigh Chapel.

In 1901, when Sir Edward Bairstow was organist, the instrument was rebuilt by Norman & Beard of Norwich. Parts of the former organ were retained, but most was new. Further work was done in 1906 and 1948. It remained in use until the latest re-building in 1963. The work was done by William Hill and Son and Norman and Beard, also known as Hill, Norman & Beard who had a connection of more than 100 years with the parish church. Most of the 1901 instrument was retained after restoration and re-voicing. The pneumatic action was replaced with electro-pneumatic action, and a new detached console was placed in the Crawford Chapel with access to the chancel by means of a door through the screen. Apart from re-voicing and one new rank on each division, the great and swell organs remained much as they were. Only the pedal organ was significantly enlarged by adding ranks of 4 ft and 2 ft pitch, a three rank mixture and 4 ft solo reed, and the trombone was extended to 8 ft and 4 ft pitch. Before 1901 there was a 4 ft stop and a three rank mixture on the pedal organ, both of which were discarded in 1901. The old choir organ was replaced by an unenclosed positif organ of authentic antique scale and with the part of the instrument that was new in 1963 was placed in the eastern bay of the Leigh Chapel, with the pedal gemshorn on display. The specification was drawn up by Mr A. G. D. Cutter, the organist in consultation with Mr R Mark Fairhead, of Hill, Norman & Beard Ltd., who was responsible for the tonal finishing of the organ.

The organists, some of whom were notable, include:

All content from Kiddle encyclopedia articles (including the article images and facts) can be freely used under Attribution-ShareAlike license, unless stated otherwise. Cite this article:
All Saints' Church, Wigan Facts for Kids. Kiddle Encyclopedia.