Amb was a princely state of the former British Raj. It governed itself (it had autonomy), but was under the overall suzerainty of the British monarch. Amb was ruled by a hereditary prince with the title of Nawab. The Nawab of Amb was the chieftain of the Tanoli tribe of Pashtun from Ghilji confederation in the Hazara. In the Partition of India in 1947, the Nawab of Tanolis/TanoKhel gave up the independence the state had previously enjoyed by joining the new country of Pakistan. Amb continued as a distinct state within Pakistan until 1969, when it was merged into the former North-West Frontier Province. The royal status of the Nawab was abolished by the Government of Pakistan in 1972.

The area in which Amb was located is historically known as Tanawal. This is in the Hazara region in what is now Khyber Pakhtunkhwa. The part covered by Amb is called "Upper Tanawal", and is now part of Mansehra District. "Lower Tanawal" is in the Abbottabad District. The name "Tanawal" comes from the name of the tribe that lives there, the Tanoli (or Tanawali). The Tanoli are Muslims. They speak Hindko.

Amb and the area around it have a long history, which goes back to the time of the invasion of the region by Alexander the Great. A settlement called Embolina, located on the Indus River, is mentioned in writings by Arrian and Ptolemy. This is the place from which the Nawabs of Amb took their title.

Amb was once formally known as Mulk e Tanawal (meaning the country of Tanawal). The early history of the region goes back to the centuries before the Mughal Empire. In the early 14th century, the Tanoli or Tanawali tribe arrived here from Central Asia, after coming through Afghanistan. They conquered it and settled here on the banks of the river Indus and a wide area around it, which thus came to be known as Tanawal.

From early on, the Tanawal area stayed mostly free from the influence of the Mughals and Sikhs and later had only limited contact with British. The people of Tanawal thus had little or no contact with other places for a long period and remained ignorant and backward. At most times, they would resist outside authority, preferring to be ruled by their own chiefs at a local level. Until the late-18th or early-19th centuries, Tanawal was not one state. It was rather an area where several important Tanoli chiefs had authority over an area of influence. The Hindwal section chiefs remained stronger than the other. In 1772, Mir Haibat Khan, the eldest son of Mir Gul Muhammad Khan, was declared to be the chief of Upper Tanawal. Later, his descendants were made as the Nawabs of Amb under the British Raj, and continued ruling over this territory until 1972. 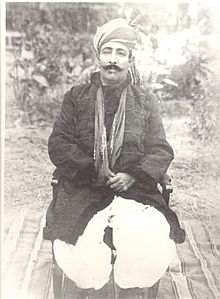 The rulers of Amb belonged to the Hindwal branch of the Tanoli. The Tanoli are of Mughal ancestry. The rulers are descendants of a Barlas Turk probably named Ameer Khan Turk but authentic records of the tribe no longer exist beyond the 18th century.

The Nawabs, or rulers of Amb were:

The concept of hereditary rulerships was abolished in Pakistan on 1 January 1972. It was done by a change to the constitution. This meant that the Nawab of Amb would no longer be recognised as a ruler. They could also no longer use their old styles and titles.

The current head of the old/former royal family is Salahuddin Saeed Khan, since 1973. He is the son of the last Nawab and is allowed to use the courtesy title of 'Nawabzada' (son of a Nawab).

All content from Kiddle encyclopedia articles (including the article images and facts) can be freely used under Attribution-ShareAlike license, unless stated otherwise. Cite this article:
Amb (princely state) Facts for Kids. Kiddle Encyclopedia.