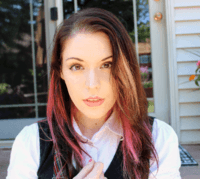 Amber Lee Connors (born April 9, 1991) is an American voice actress, casting and voice director and script writer. She has provided voices for English dubbed Japanese anime and video games. Connors was born in Cleveland, Ohio, but raised in Dallas, Texas.

Connors is perhaps best known for proving her voice for Chica and other characters in the Five Night's at Freddy's series beginning in FNaF World and later in Five Nights at Freddy's: Sister Location and Ultimate Custom Night. She is also known for her role as Nozomi in Keijo!!!.

All content from Kiddle encyclopedia articles (including the article images and facts) can be freely used under Attribution-ShareAlike license, unless stated otherwise. Cite this article:
Amber Lee Connors Facts for Kids. Kiddle Encyclopedia.