Ambrose is a rural town and locality in the Gladstone Region, Queensland, Australia. In the 2016 census, Ambrose had a population of 218 people.

Ambrose Provisional School opened in December 1913 with 12 students, becoming a State School on 1 December 1914. It celebrates its centenary in 2014. 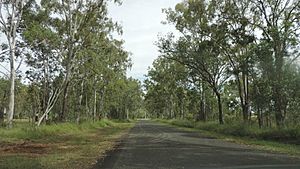 The Bruce Highway and railway pass through the northern part of the locality; the town centre is close to both. Most of the land is in the locality is used for grazing cattle.

Notable people from or having lived in Ambrose include:

All content from Kiddle encyclopedia articles (including the article images and facts) can be freely used under Attribution-ShareAlike license, unless stated otherwise. Cite this article:
Ambrose, Queensland Facts for Kids. Kiddle Encyclopedia.