Mount Larcom is the name of a mountain, a township and a locality in the Gladstone Region, Queensland, Australia. The township/locality is at the junction of the Bruce Highway and Port Curtis Way approximately 70 kilometres (43 mi) south of the city of Rockhampton. At the 2011 census, Mount Larcom had a population of 278.

Mount Larcombe Provisional School opened on 13 November 1882, but closed for some time during the 1890s due to low student numbers. In 1909, it was upgraded to be Mount Larcombe State School and was renamed Mount Larcom State School in 1913. In 1964, a secondary department (Years 8-10) was added to the school.

Mount Larcom Post Office opened by December 1909 (a receiving office had been open from 1904, first known as Mount Larcombe).

On Sunday 16 July 1922 the Catholic church was opened by Bishop of Rockhampton Joseph Shiel. It was named for Our Lady of Mount Carmel. The land cost £64 and the church building cost £441.

The first of Mount Larcom's annual agricultural shows was held on 8 October 1919. It was opened by George Carter, the Member of the Queensland Legislative Assembly for Port Curtis.

The ambulance station first opened in 1924; its replacement opened on 20 December 2001.

Mount Larcom has a number of heritage-listed sites, including: 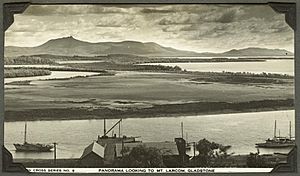 The mountain, rising to 631 metres (2,070 ft), is slightly east of the township and is a dominant feature on the horizon, especially from the town of Gladstone. It was named by Matthew Flinders after a Naval Captain that he served under. 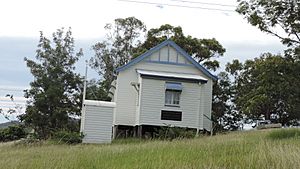 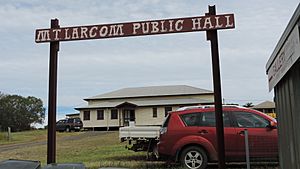 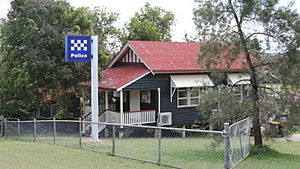 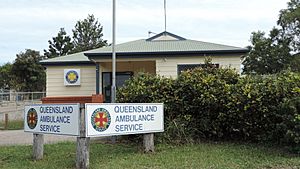 The Mount Larcom Library is on Raglan Street; it is operated by the Gladstone Regional Council.

There is a Catholic church, Our Lady of Mount Carmel, at 24 Balfour Street. Each month there is a mass and a lay-led liturgy.

There is a public hall in Raglan Street.

Despite its small population, Mount Larcom has a police station (Gladstone Street), an ambulance station (Raglan Street), a volunteer Rural Fire Service and a volunteer State Emergency Service group. However, the nearest hospitals are in Gladstone and Rockhampton. Being located near the junction of two highways, a common emergency is vehicle crashes.

The Mount Larcom and District Show Society organise an annual agricultural show in June each year. In 2014, in addition to the livestock competitions, there are other activities including a ute muster, woodchopping and fireworks.

All content from Kiddle encyclopedia articles (including the article images and facts) can be freely used under Attribution-ShareAlike license, unless stated otherwise. Cite this article:
Mount Larcom, Queensland Facts for Kids. Kiddle Encyclopedia.