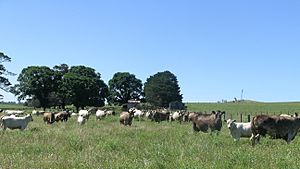 Pastoral farming (also known in some regions as ranching, livestock farming or grazing) is aimed at producing livestock, rather than growing crops. Examples include dairy farming, raising beef cattle, and raising sheep for wool. In contrast, arable farming concentrates on crops rather than livestock. Finally, Mixed farming incorporates livestock and crops on a single farm. Some mixed farmers grow crops purely as fodder for their livestock; some crop farmers grow fodder and sell it. In some cases (such as in Australia) pastoral farmers are known as graziers, and in some cases pastoralists (in a use of the term different from traditional nomadic livestock cultures). Pastoral farming is a non-nomadic form of pastoralism in which the livestock farmer has some form of ownership of the land used, giving the farmer more economic incentive to improve the land. Unlike other pastoral systems, pastoral farmers are sedentary and do not change locations in search for fresh resources. Rather, pastoral farmers adjust their pastures to fit the needs of their animals. Improvements include drainage (in wet regions), stock tanks (in dry regions), irrigation and sowing clover.

Pastoral farming is common in Argentina, Australia, Brazil, Great Britain, Ireland, New Zealand, and the Western United States and Canada, among other places.

All content from Kiddle encyclopedia articles (including the article images and facts) can be freely used under Attribution-ShareAlike license, unless stated otherwise. Cite this article:
Pastoral farming Facts for Kids. Kiddle Encyclopedia.