Amesbury is a town and civil parish in Wiltshire, England. It is known for the prehistoric monument of Stonehenge which is within the parish. The town is claimed to be the oldest occupied settlement in Great Britain, having been first settled around 8820 BC. The parish includes the hamlets of Ratfyn and West Amesbury, and part of Boscombe Down military airfield.

Amesbury is located in southern Wiltshire, 7 miles (11 km) north of Salisbury on the A345. It sits in the River Avon valley on the southern fringes of Salisbury Plain and has historically been considered an important river crossing area on the road from London to Warminster and Exeter. This has continued into the present with the building of the A303 across the Avon next to the town. Originally the town developed around the water meadows next to several bends in the river, but in time has spread onto the valley hillsides and absorbed part of the military airfield at Boscombe Down.

The nearest railway station is located at nearby Grateley, on the London to Salisbury line. 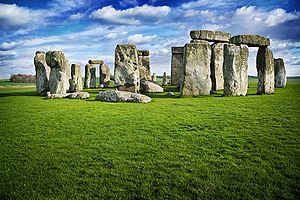 The land around Amesbury has been settled since prehistoric times, evidenced by the monument of Stonehenge. Other finds in the parish point to large scale prehistoric structures and settlements in the whole area, including Bluestonehenge at West Amesbury, the numerous other monuments around Stonehenge, the discovery of a Neolithic village in the neighbouring parish of Durrington by the Stonehenge Riverside Project, and continuing excavations at Boscombe Down where Wessex Archaeology found the Amesbury Archer and Boscombe Bowmen. They are now on display at Salisbury and South Wiltshire Museum. Amesbury is recognized as the oldest continuously occupied UK settlement.

During the Iron Age a large hill fort now known as Vespasian's Camp was built alongside the Avenue and overlooking the River Avon. The fort could easily have catered for up to 1000 people, and was probably surrounded by smaller settlements and farming communities.

Roman remains are poorly documented at Amesbury, but excavations have revealed Roman structures in the Stonehenge landscape, and Wessex Archaeology have discovered a large Roman graveyard in the area of the Amesbury Archer burial. It is likely that there was a large Romano-British settlement overlooking the River Avon at this point.

It has been suggested that the name of Amesbury is derived from Ambrosius Aurelianus, leader of Romano-British resistance to Saxon invasions in the 5th century. If this is the case he is likely to have used the hill fort as a stronghold. It is possible that an order of monks established a monastery in the area that was destroyed by the Saxons before they settled the area in the 7th century. Amesbury is also associated with the Arthurian legend: the convent to which Guinevere retired was said to have been the one at Amesbury.

In 979 AD a Benedictine abbey, the Abbey of St Mary and St Melor, was founded on what may have been the site of a previous monastery by Dowager Queen Ælfthryth. In 1177 the abbey was dissolved by Henry II and replaced with a double priory of the Fontevrault order. Eleanor of Provence was buried in the abbey on 11 September 1291. At some point in time it seems likely that the church became the parish church, and it is possible that this is why it was spared destruction in 1540 when, as part of the reformation, the priory and all other associated buildings were destroyed. Amesbury became an estate and was given to Edward Seymour, 1st Earl of Hertford by the crown.

On John Speed's map of Wiltshire (1611), the town's name is spelt both Amesbury (for the hundred) and Ambersbury (for the town itself).

The Seymour family held Amesbury estate until 1675 and had several grand homes built, including Kent and Diana houses, and a new mansion in 1660. The estate subsequently passed to the Bruce family, and then to Lord Carleton, who bequeathed it to his nephew Charles Douglas, 3rd Duke of Queensberry. It remained in the Queensberry family until 1824. It is believed that at some point in the early 19th century, William Douglas, 4th Duke of Queensberry planted the Nile Clumps to commemorate Admiral Nelson and had the hill fort landscaped as part of the grounds around the mansion. In 1824 the Antrobus family acquired the estate and it remained in their hands until 1915 when, after the last heir was killed in France, Lord Antrobus sold the grounds–-including Stonehenge-–to private bidders. The mansion remained in their hands until 1979. 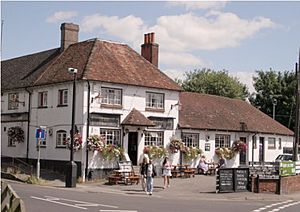 The Greyhound Inn at Amesbury

With the establishment of the military Aeroplane and Armament Experimental Establishment at Boscombe Down in 1939, Amesbury began to expand. As it sits on the A303 commuter belt, Amesbury has seen substantial developments on the land between the old town centre and Boscombe Down. Several new housing estates have been completed, and the most recent one – Archers Gate – has taken its name from the discovery of the Amesbury Archer. At the Boscombe Down junction of the A303 a new mixed business development known as Solstice Park has been built and plans have been submitted for a Regional Distribution Centre for a major retailer.

At the 2011 Census the population of the civil parish was 10,724. For the Amesbury Community Area the mid-2011 population was estimated to be 33,660 (this is a wide area stretching to Tilshead, Larkhill and Figheldean in the north; Cholderton in the east; the Winterbournes, the Woodfords and Great Wishford in the south; and Wylye in the west).

The Church of England parish church of St Mary and St Melor is Grade I listed. It dates from the 12th century but was restored by William Butterfield in 1852-3.

The mansion known as Amesbury Abbey is Grade I listed. It was built in 1834-1840 by architect Thomas Hopper for Sir Edmund Antrobus and replaced a house built in 1661 by John Webb for the 2nd Duke of Somerset.

Diana's House and Kent House, gatehouses to the Abbey from the early 17th century, are both Grade II* listed.

West Amesbury House is from the 15th century and is Grade I listed; it was remodelled in the early 20th century by Detmar Blow.

Although Stonehenge falls within the parish of Amesbury, the town does not directly benefit from the monument's fame. However, Amesbury has appeared in the public eye on its own merits in the past.

In 2002, the discovery of the richest Bronze Age burial site yet found in Britain was made at Amesbury. The remains of two men of apparently aristocratic rank were accompanied by over 100 objects including arrowheads, copper knives and the earliest worked gold in the country. The occupant of the more richly furnished grave has become known as the "Amesbury Archer".

The town is linked to the Arthurian legend as it is popularly believed that Guinevere retired to the original convent at Amesbury after leaving Arthur. Legend holds that she is buried in the grounds of the former Abbey.

Amesbury has a secondary school – The Stonehenge School – and four primary schools:

Amesbury is 6 miles (10 km) from the nearest station at Grateley on the London to Salisbury line. The town's own station, Amesbury railway station, was closed in 1963 along with the rest of the Bulford Camp Railway.

All content from Kiddle encyclopedia articles (including the article images and facts) can be freely used under Attribution-ShareAlike license, unless stated otherwise. Cite this article:
Amesbury Facts for Kids. Kiddle Encyclopedia.