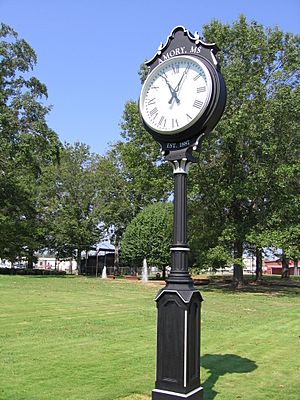 Amory is a city in Monroe County, Mississippi, United States. The population was 7,316 as of the 2010 census.

Amory was the first planned city in Mississippi. The Kansas City, Memphis & Birmingham Railroad needed a midpoint between Memphis, Tennessee and Birmingham, Alabama for their locomotives, and they laid out the new town of Amory in 1887. People from nearby Cotton Gin Port on the Tombigbee River abandoned their town and moved to Amory. 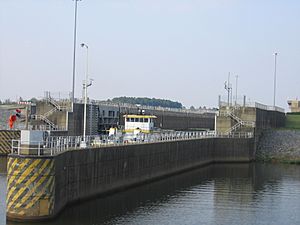 There were 2,876 households out of which 30.6% had children under the age of 18 living with them, 43.8% were married couples living together, 19.3% had a female householder with no husband present, and 33.8% were non-families. 31.7% of all households were made up of individuals and 15.7% had someone living alone who was 65 years of age or older. The average household size was 2.36 and the average family size was 2.97. 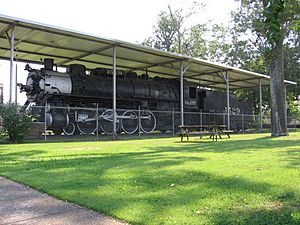 In honor of its cultural and historical heritage, the city of Amory holds an annual festival each April known as the "Railroad Festival" in Frisco Park in downtown Amory. Among other attractions, the Railroad Festival includes southern foods—such as fried catfish, barbecue, and apple fritters—rides, arts and crafts, and live music, most notably the local band The Gents who have brought fans out for years with their Motown, Blues Brothers and classic oldies show. Although the time of year—April—often results in rain during one or more days of the 3-day festival, turnout is generally quite large, with as many as 40,000 visiting the festival over the period of a weekend.

In addition to the annual Railroad Festival, in September of every other year, Amory is host to "Entertainment for Education", also known as "Stars Over Mississippi", in which a number of celebrities and entertainers host a benefit concert to raise funds for local scholarships. Past performers and attendees have included Vince Gill, Dolly Parton, Nell Carter, Sandi Patty, Kathie Lee Gifford, Kathy Ireland, Brad Paisley, Brooks and Dunn, Ray Romano, Tony Danza, Patricia Heaton, Doris Roberts, Whoopi Goldberg, Brad Garrett, and Prince Edward.

All content from Kiddle encyclopedia articles (including the article images and facts) can be freely used under Attribution-ShareAlike license, unless stated otherwise. Cite this article:
Amory, Mississippi Facts for Kids. Kiddle Encyclopedia.