Map of the Tennessee-Tombigbee Waterway

The Tennessee–Tombigbee Waterway (popularly known as the Tenn-Tom) is a 234-mile (377 km) man-made U.S. waterway built in the 20th century from the Tennessee River to the junction of the Black Warrior-Tombigbee River system near Demopolis, Alabama. The Tennessee–Tombigbee Waterway links commercial navigation from the nation's midsection to the Gulf of Mexico. The major features of the waterway are 234 miles (377 km) of navigation channels, a 175-foot-deep (53 m) cut between the watersheds of the Tombigbee and Tennessee rivers, and ten locks and dams. The locks are 9 by 110 by 600 feet (2.7 m × 33.5 m × 182.9 m), the same dimension as those on the Mississippi above Lock and Dam 26 at Alton, Illinois. Under construction for 12 years by the U.S. Army Corps of Engineers, the Tennessee–Tombigbee Waterway was completed in December 1984 at a total cost of nearly $2 billion.

The Tenn-Tom encompasses 17 public ports and terminals, 110,000 acres (450 km2) of land, and another 88,000 acres (360 km2) managed by state conservation agencies for wildlife habitat preservation and recreational use.

First proposed in the Colonial period, the idea for a commercial waterway link between the Tennessee and Tombigbee rivers did not receive serious attention until the advent of river steamboat traffic in the early nineteenth century. It stimulated trade throughout the river cities, and the ability to get products to the Gulf Coast for overseas shipping. As steamboat efficiency gains caused water transport costs to decline, in 1875 engineers surveyed a potential canal route for the first time. They issued a negative report, emphasizing that prohibitive cost estimates kept the project from economic feasibility.

Enthusiasm for the project languished until the presidency of Franklin D. Roosevelt, who took office during the Great Depression and quickly conceived of investment in major infrastructure projects to put many of the unemployed to work. The development of the Tennessee River by the TVA, especially the construction of the Pickwick Lock and Dam in 1938, helped decrease the Tenn-Tom's potential economic costs and increase its potential benefits. Pickwick Lake's design included an embayment on its south shore at Yellow Creek, which would permit the design and construction of an entrance to a future southward waterway (leading to the Tombigbee River), should it be decided that such a waterway should be built in the future.

Later, construction (under World War II emergency authorization) of Kentucky Dam at Gilbertsville, Kentucky, near the mouth of the Tennessee River's confluence with the Ohio River, would complete the "northern" half of the future waterway. As early as 1941 the proposal was combined with those for other waterways, such as the St. Lawrence Seaway, with the aim of building broader political support. Additionally, political candidates in the South began to favor construction of the waterway for political reasons, that is, in order to appeal to their voters, rather than for economic reasons. In this period, most blacks in the South were still disenfranchised; the waterway was conceived as benefitting white businessmen and only southern white conservatives were voting on these proposals from that region. In the early 1960s it was proposed that the canal could be created by use of atomic blasts.

As part of his "Southern Strategy" for election, Republican President Richard Nixon committed to the project. He included $1 million in the Corps of Engineers' 1971 budget to start construction of the Tenn-Tom. Funding shortages and legal challenges delayed construction until December 1972, but Nixon's efforts initiated official Tenn-Tom waterway construction.

The U.S. Army Corps of Engineers began work on the project in 1972. During the construction process, land excavation reached about 175 feet (53 m) in depth and required the excavation of nearly 310 million cubic yards of soil (the equivalent of more than 100 million dump truck loads). The project was completed on December 12, 1984, nearly two years ahead of schedule.

When completed, the Tenn-Tom waterway's total cost was $1.992 billion, including non-federal costs. Some political and economic commentators derided the project as "pork-barrel politics at its worst". For the first few years after its completion, such criticism appeared valid. The Tennessee–Tombigbee Waterway had opened in the midst of an economic recession in the barge business, which resulted in initially disappointingly low use of the waterway.

The 1988 drought, however, closed the Mississippi River and shifted traffic to the Tenn-Tom canal. This coincided with an economic turnaround on the Tennessee-Tombigbee corridor, wherein trade tonnage and commercial investment increased steadily over several years.

The two primary commodities shipped via the Tenn-Tom are coal and timber products, together comprising about 70 percent of total commercial shipping on the waterway. The Tenn-Tom also provides access to over 34 million acres (140,000 km2) of commercial forests and approximately two-thirds of all recoverable coal reserves in the nation. Industries that use these natural resources have found the waterway to be their most cost-efficient mode of transportation. Other popular trade products carried on the Tenn-Tom include grain, gravel, sand, and iron.

A 2009 study by Troy University found that the waterway had contributed nearly $43 billion in direct, indirect, and induced economic benefits to the United States, including the direct creation of more than 29,000 jobs, and was replacing an annual average of 284,000 truckloads. 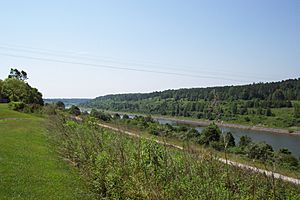 Pickwick Lake is a popular location for water sports such as waterskiing and wakeboarding.

For construction of the Divide Cut, the entire town of Holcut, Mississippi, had to be removed and demolished. Today, the Holcut Memorial lies alongside the waterway on the previous site of the town.

The waterway is composed of ten locks (listed below from north to south along the waterway); many are named after Southern politicians who supported the project:

All content from Kiddle encyclopedia articles (including the article images and facts) can be freely used under Attribution-ShareAlike license, unless stated otherwise. Cite this article:
Tennessee–Tombigbee Waterway Facts for Kids. Kiddle Encyclopedia.