Aliceville is a city in Pickens County, Alabama, United States, located thirty-six miles west of Tuscaloosa. At the 2010 census its population was 2,486, down from 2,567 in 2000. Founded in the first decade of the 20th century and incorporated in 1907, the city has become notable for its World War II-era prisoner-of-war camp, Camp Aliceville. Since 1930, it has been the largest municipality in Pickens County.

In 1902 the settlement that would become Aliceville was founded with the opening of a single store. The town was named in honor of the wife of John T. Cochrane, founder of the Alabama, Tennessee and Northern Railroad and moving force behind the construction of the short line from Carrollton, Alabama to Aliceville. Within two years of the completion of the short line, Aliceville had grown to what the Montgomery Advertiser called in 1905 "a town of considerable pretensions. There are about a dozen stores, a bank, public buildings and numerous enterprises."

In 1907 an election was scheduled to allow the citizens of Aliceville to decide whether their town should be incorporated. Incorporation was approved by the town's voters, and on March 19, 1907, a municipal election was held to choose town officers, including a mayor and five aldermen: T.H. Sommerville, J.M. Summerville, A. Hood, J.D. Sanders, W.E. Stringfellow, and J.B. Cunningham, respectively.

By March 1908 the town had decreed that all streets in Aliceville should have ten foot sidewalks built on both sides. Property owners were to be responsible for building the sidewalks in front of their parcels. This work, along with the paving of the streets, was largely completed by June 1910 and the city began considering the installation of water and electricity.

During World War II, a Prisoner-of-war camp was set up in Aliceville to hold 6,000 German prisoners, most from the Afrika Korps, although the population of the camp rarely exceeded 3,500. The camp operated between June 2, 1943 and September 30, 1945. Prisoners were brought to the camp via the St. Louis – San Francisco Railway.

The only remaining trace of the camp is an old stone chimney. However, there is a German POW collection at the Aliceville Museum and Cultural Arts Center which retains documentation from the camp including maps, photographs, camp publications, letters, and artwork. 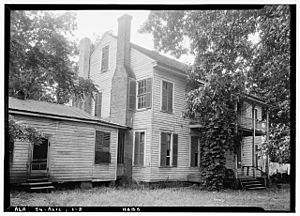 During the civil rights movement, organizing in small towns such as Aliceville was often more dangerous for activists than it was in larger cities because of their isolation. As late as 1965, according to James Corder, a Primitive Baptist minister from Aliceville, Pickens County had not yet experienced any civil unrest related to the movement. Jordan was inspired by the Selma to Montgomery marches in March of that year to organize a civil rights group in Aliceville, which he called the "Rural Farm and Development Council" in order to avoid scrutiny. The group organized protests at the Aliceville city hall to oppose officially sanctioned racism in the town.

In 1982, Aliceville native Maggie Bozeman testified at Congressional hearings held in Montgomery, Alabama, concerning proposed amendments to the Voting Rights Act of 1965. She testified that as late as 1980 in Aliceville and Pickens County voting took place in the open rather than in private booths and that white police officers were stationed in polling places, taking photographs of people who assisted black voters. This revelation outraged Republican congressman Henry Hyde, who had previously been unconvinced of the necessity of amending the law.

Bozeman's testimony followed her 1979 arrest, conviction, and sentencing for vote fraud. Bozeman and fellow political activist Julia Wilder of Olney, Alabama were given "the sternest sentences for a vote fraud conviction in recent Alabama history": five years for Wilder and four for Bozeman. The sentences were upheld on appeal, prompting the formation of an organization, the National Coalition to Free Julia Wilder and Maggie Bozeman and Save the Voting Rights Act, and a march through Aliceville from Carrollton, Alabama, to Montgomery to publicize their cause.

The United States Department of Justice sent eight poll-watchers to Aliceville to observe the 1984 primary election runoffs following reports from observers of the July 1984 main primaries.

In November 2013 three tanker cars carrying crude oil exploded when an Alabama and Gulf Coast Railway train derailed near Aliceville. As of March 2014, the cleanup of the spilt oil was still not complete, despite four months of work. About 750,000 gallons of Bakken crude was released.

The climate in this area is characterized by hot, humid summers and generally mild to cool winters. According to the Köppen Climate Classification system, Aliceville has a humid subtropical climate, abbreviated "Cfa" on climate maps.

Aliceville first appeared on the 1910 U.S. Census as an incorporated town. It became the largest town in Pickens County in 1930, surpassing Reform, and continues to hold the title as of 2010.

Aliceville is home to the Aliceville POW Museum, which houses papers, letters, documents, maps, and other material from the World War II prisoner of war camp situated in the town from 1942 to 1945. The museum opened in 1995 and, in addition to the POW material, houses a permanent exhibit on the Aliceville Coca-Cola bottling plant.

Aliceville is home to the Federal Correctional Institution, Aliceville. Construction on the $250 million, 1,500-bed medium-security women’s prison began in 2008 and was completed in 2011. The facility also includes a 256-bed minimum-security work camp.

All content from Kiddle encyclopedia articles (including the article images and facts) can be freely used under Attribution-ShareAlike license, unless stated otherwise. Cite this article:
Aliceville, Alabama Facts for Kids. Kiddle Encyclopedia.