Aberdeen is the county seat of Monroe County, Mississippi, United States. As of the 2010 census, the population was 5,612.

Located on the banks of the Tombigbee River, Aberdeen was one of the busiest Mississippi ports of the 19th century. Cotton was heavily traded in town, and for a time Aberdeen was Mississippi's second largest city. Aberdeen retains many historic structures from this period, with over 200 buildings on the National Register of Historic Places. In the spring of each year, Aberdeen hosts pilgrimages to its historic antebellum homes. The most prominent of these antebellum homes is The Magnolias, which was built in 1850. 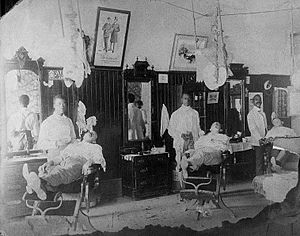 In 1540, Hernando DeSoto's expedition were the first Europeans to travel through the vicinity of Aberdeen.

Aberdeen was first settled in 1834 and chartered as a town in 1837. In 1849, it became the county seat when Monroe County was formed.

According to the United States Geological Survey, variant names are Dundee and New Aberdeen. 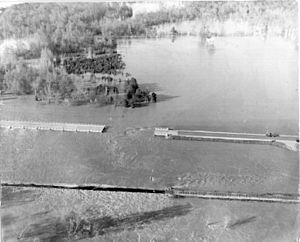 Failure of the Mississippi Highway 25 N/U.S. Route 45 S bridge over the Tombigbee River in Aberdeen during the 1955 floods.

The climate in this area is characterized by hot, humid summers and generally mild to cool winters. According to the Köppen Climate Classification system, Aberdeen has a humid subtropical climate, abbreviated "Cfa" on climate maps.

The city of Aberdeen is the subject of the HGTV show Hometown Renovation, where local makeup artist and designer Billy Brasfield sets to redesign and renovate some of the city's houses and landmarks.

The city is also the subject of a song by blues artist Bukka White, Aberdeen, Mississippi, later covered by guitarist Kenny Wayne Shepherd as Aberdeen.

The City of Aberdeen is served by the Aberdeen School District.

All content from Kiddle encyclopedia articles (including the article images and facts) can be freely used under Attribution-ShareAlike license, unless stated otherwise. Cite this article:
Aberdeen, Mississippi Facts for Kids. Kiddle Encyclopedia.