Amy Joy Williams, MBE (born 29 September 1982) is a British former skeleton racer and Olympic gold medallist. Originally a runner, she began training in skeleton in 2002 after trying the sport on a push-start track at the University of Bath. Although unable to qualify for the 2006 Winter Olympics, she was a member of the Great Britain team four years later at the 2010 Games. She won a gold medal, becoming the first British individual gold medallist at a Winter Olympics for 30 years and the only British medallist in those Olympics.

Williams was originally a 400m runner but she was unable to qualify for the national athletics team. She began competing in skeleton in 2002 after trying out at a push-start track at the University of Bath. She described her first experience on a skeleton track as exhilarating and terrifying, but she nonetheless enjoyed it and began training in skeleton.

At her first major event, the 2009 World Championships in Lake Placid, she won a silver medal. 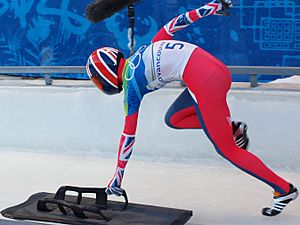 Williams at the 2010 Winter Olympics

Williams was unable to qualify for the 2006 Winter Olympics in Turin, Italy, as Great Britain was only allowed to enter a single skeleton athlete in that year's competition, a spot won by Shelley Rudman, who went on to win the silver medal. Four years later, she qualified for the 2010 Winter Olympics in Vancouver, British Columbia, Canada, where her country was allowed to send two skeleton athletes.

At the 2010 Games, Williams won the gold medal in the women's skeleton, breaking the track record twice along the way and winning by more than a half a second. At the end of the first day, on which Williams had established a 0.3s advantage over second placed Kerstin Szymkowiak, two protests were filed by other nations over the aerodynamics of Williams' helmet. The protests claimed that the helmet's spoilers were illegal and gave her an unfair aerodynamic advantage. The manufacturer claimed that they were integral to the helmet's design. Both protests were rejected by the International Bobsleigh and Tobogganing Federation, which had passed the helmet—with ridges—days earlier.

Williams was a contestant in the second series of the ITV show 71 Degrees North in late 2011. She finished the series in third place. She has also appeared in the CBBC series, 12 Again.

On 1 May 2012, Williams announced her retirement from skeleton and said her injuries were behind her quitting the sport.

In January 2013, BBC Two announced Williams as a co-presenter on the 35th series of Ski Sunday.

Approached by motorsports pundit and part-time rally driver Tony Jardine, Williams agreed to co-drive a Honda Civic, with the aim of competing in Rally GB. After gaining her licence, the pair successfully trained and qualified to compete in the 2013 Wales Rally GB.

As well as taking up a new role as TeamGB Ambassador, with Robin Cousins, she has also taken a commentator role with the BBC Sport commentating team, specialising in the ice sports of skeleton and bobsleigh.

On 25 April 2014, it was announced that Williams would replace Rachel Riley as a presenter on Channel 5's The Gadget Show. For the 2017 series of the show, Williams decided to leave to care for her child.

In 2018 she was part of the BBC's team providing coverage on the 2018 Winter Olympics.

In October 2019, Williams was appointed as the first Ambassador of the Dame Kelly Holmes Trust, a charity that enables former athletes to mentor and support disadvantaged young people.

Williams was appointed Member of the Order of the British Empire (MBE) in the 2010 Birthday Honours. She was installed as an Honorary Freeman of the City of Bath on 5 June 2010.

All content from Kiddle encyclopedia articles (including the article images and facts) can be freely used under Attribution-ShareAlike license, unless stated otherwise. Cite this article:
Amy Williams Facts for Kids. Kiddle Encyclopedia.