Anchiceratops was a kind of plant-eating dinosaur. It had a long frill on the back of its head and three horns on its face. There were two long ones above its eyes and one shorter one on its nose. It was similar to Triceratops, which also had these features. Anchiceratops was found in the Horseshoe Canyon Formation, which is a fossil site in Alberta. There is just one species of Anchiceratops, A. ornatus.

The skeleton found by Sternberg

Barnum Brown found the first Anchiceratops skulls in 1912. He gave them their name, Anchiceratops ornatus, in 1914, two years later. Anchiceratops means "almost Ceratops" and ornatus means "ornate". In 1924, C. M. Sternberg discovered another skull. It was smaller and had a long beak. In 1929, he named this species A. longirostris, meaning "long snout." However, in 1990, Leham decided that A. longirostris was only the female of A. ornatus. Another study done by Dodson and Currie in the same year agreed with this idea. In 1925, Sternberg found a headless skeleton that he thought belonged to Anchiceratops. However, it could belong to Arrhinoceratops or a new genus. Other skulls have been found but they have never been described. 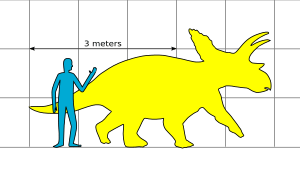 Anchiceratops had a short nose horn that went forwards. The horns above its eyes (brow horns) were long and went a bit to the side. They were slightly curved. The frill was narrow and had many small hornlets on its outside edge. It did not angle upwards very far. The snout on some specimens is very long.

The skeleton that may belong to this dinosaur was strange. It was smaller than in most other ceratopsids. It had a long neck and strong arms, but it had a short tail with only 38 vertebrae instead of 45. The length of its thighbone was 74 centimeters and its shin was 51.5 centimeters long. 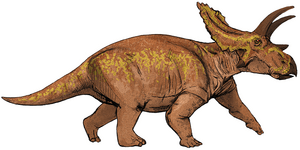 Anchiceratops was classified like this by Scott Sampson in 2010. This family tree shows many related ceratopsids. 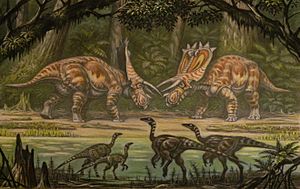 All content from Kiddle encyclopedia articles (including the article images and facts) can be freely used under Attribution-ShareAlike license, unless stated otherwise. Cite this article:
Anchiceratops Facts for Kids. Kiddle Encyclopedia.