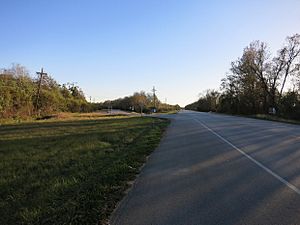 The intersection of FM 521 and County 44 (at left), once an important railroad intersection.

Anchor is an unincorporated community in central Brazoria County, Texas, united States. The location of Anchor is at the intersection of Farm to Market Road 521 and County Road 44, 4 miles (6.4 km) northwest of Angleton.

An episode of The Dick Van Dyke Show, number 146, entitled "Remember the Alimony", was set in Anchor. In the episode, the town was moved to very near the Mexican border and given an army base.

All content from Kiddle encyclopedia articles (including the article images and facts) can be freely used under Attribution-ShareAlike license, unless stated otherwise. Cite this article:
Anchor, Texas Facts for Kids. Kiddle Encyclopedia.