"Ancient Manipur"', also known as "Kangleipak", was a civilization, concentrated along the central plains of the present day Manipur, India. The Kangla served as the capital city of Ancient Manipur (Kangleipak) since time immemorial till the late 19th century AD. It has its earliest evidence of monarchy right from 15th century BC, during the reign of Emperor "Tangja Leela Pakhangba" (1445 BC-1405 BC). 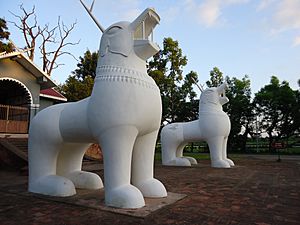 The grand statues of the dragon lions, standing inside the Kangla. 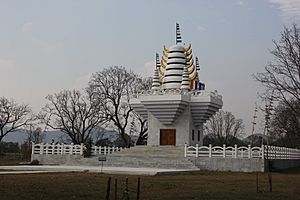 The ancient temple (rebuilt) of Lord Pakhangba inside the Kangla. 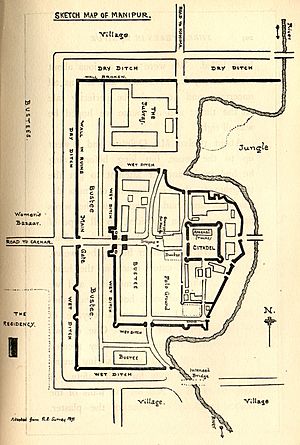 Layout of the citadel of Kangla, the ancient capital city of Manipur

The imperial history of Ancient Manipur began with the reign of Tangja Leela Pakhangba in 1445 BC.

The game of polo (sagol kangjei) was invented during the reign of King Kangba (1405 BC-1359BC), the successor of Tangja Leela Pakhangba. This remarkable achievement was recorded in many ancient scriptures including the Kangbalon and the Kangjeirol.

The territory of Manipur (Kangleipak) is mountainous and thereby, ancient Manipur consists of several smaller region each with its own dialect, cultural peculiarities, and identity.

The ancient Manipuri language (Meitei language) had a rich granary of scriptures (Puya), of numerous topics, written in the archaic Meitei script. One of the oldest scripture is the "Wakoklon Heelel Thilen Salai Amailon Pukok Puya", written in 1398 BC (verified by the National Archives of India, New Delhi). 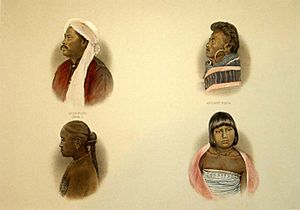 Illustration of common people of Manipur

Most people of ancient Manipur were farmers tied to their lands. Their dwellings were restricted to immediate family members.

The ancient architectural designs of common houses were believed to be sustainable, eco friendly and affordable. It gives a cooling effect during hot summer and a warming effect during chilling winter. 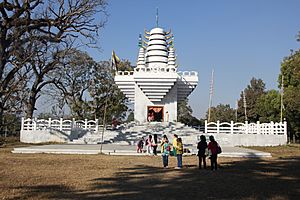 The ancient religion of the indigenous ethnicities of the hills and the plains is the Sanamahism. The abstract concept of the space time entity is the ultimate God creator of the universe. Beliefs in the divine and in the afterlife were ingrained in the civilization of ancient Manipur from its inception. The ancient rulers were based on the divine right of kings. 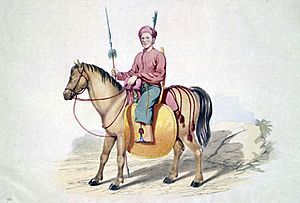 Lal-lup system (literally, Lal means war; lup means club or association or organization) was a predominant system in ancient Manipur. According to the system, every men of indigenous ethnicity of above 16 years of age was a member.

All content from Kiddle encyclopedia articles (including the article images and facts) can be freely used under Attribution-ShareAlike license, unless stated otherwise. Cite this article:
Ancient Manipur Facts for Kids. Kiddle Encyclopedia.