Kohima is the hilly capital city of India's north eastern state of Nagaland. With a resident population of 99,039 it is the second largest city in the state.

Originally known as Kewhira, it was founded in 1878 when the British Empire established its headquarters of the then Naga Hills. The town was the site of the Battle of Kohima, one of the few World War II battles on Indian soil. It officially became the capital after the state of Nagaland was inaugurated in 1963.

Kohima was originally known as Kewhira. The name, Kohima, was officially given by the British as they could not pronounce the Angami name of Kewhira (Tenyidie for "the land where the flower Kewhi grows"). It is called after the wild flowering plant Kewhi, found in the mountains. Most local people prefer to use 'Kewhira'. 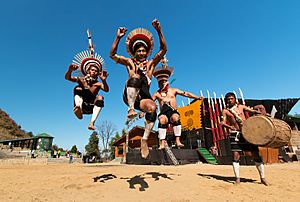 Nagas of Nagaland, India rehearsing their traditional dance during the Hornbill Festival

The Hornbill Festival was launched in December 2000 to encourage inter-tribal interaction and to promote the cultural heritage of the state. Organized by the State Tourism and Art and Culture Departments, Hornbill Festival showcases cultural displays under one roof. The festival takes place between the 1st and 10 December every year.

The week-long Hornbill Festival is held at Kisama Heritage Village, Kisama. All the tribes of Nagaland take part in this festival. The aim of the festival is to revive and protect the rich culture of Nagaland and display its traditions. The festival is named after the hornbill, which is mentioned in the folklore of most of the state’s tribes. 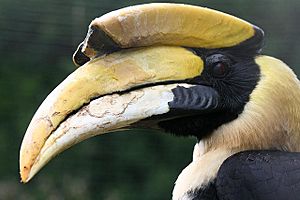 All content from Kiddle encyclopedia articles (including the article images and facts) can be freely used under Attribution-ShareAlike license, unless stated otherwise. Cite this article:
Kohima Facts for Kids. Kiddle Encyclopedia.