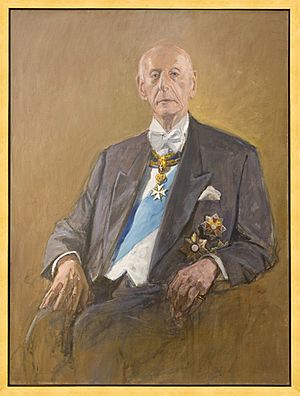 He is the founder of the Ciechanowiecki Foundation at the Royal Castle in Warsaw (1986). He is an Honorary Professor of the Academy of Fine Arts in Warsaw and a member of the Polish Academy of Sciences. He was honored with the Order of the White Eagle in 1998, Grand Cross of Polonia Restituta, war medals, Gloria Artis Gold Medal and other awards.

Ciechanowiecki died in London at the age of 91.

All content from Kiddle encyclopedia articles (including the article images and facts) can be freely used under Attribution-ShareAlike license, unless stated otherwise. Cite this article:
Andrzej Ciechanowiecki Facts for Kids. Kiddle Encyclopedia.