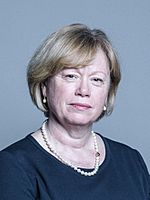 An official photograph of Baroness Smith of Basildon

Angela Evans Smith, Baroness Smith of Basildon (born 7 January 1959) is a Labour Co-operative politician from England. She was Member of Parliament (MP) for Basildon from 1997 until losing her seat to the Conservatives at the 2010 General Election.

Smith was a Minister of State in the Cabinet Office, incorporating the offices of Minister for the Third Sector and Minister for Social Exclusion.

All content from Kiddle encyclopedia articles (including the article images and facts) can be freely used under Attribution-ShareAlike license, unless stated otherwise. Cite this article:
Angela Smith, Baroness Smith of Basildon Facts for Kids. Kiddle Encyclopedia.