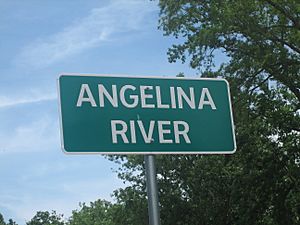 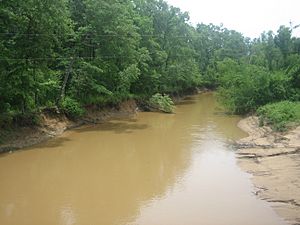 The Sam Rayburn Reservoir is on the southern part of the river.

The river was named for a native Hasinai girl whom Spanish missionaries called Angelina. It was well known to Spanish and French explorers and to missionaries in East Texas. Spanish land grants along the stream date back to the later eighteenth century, and there was considerable settlement in the area during the Mexican period.

In 1832, the Battle of Nacogdoches spilled over onto the Angelina, when James Bowie ambushed the fleeing Mexican army at this river.

River traffic on the Angelina began to die in the 1880s with the arrival of the railroads. By 1900, the stream was no longer navigable. Farming and clear-cutting by the growing lumber industry in the river's watershed caused the river to silt up, and numerous sandbars formed along its course.

The Angelina River is mentioned in "Rivertown" by Texan Hayes Carll on his 2005 album Little Rock. Mason Williams, in "The Rivers of Texas" on the album Of Time and Rivers Flowing, says "the fair Angelina runs glossy and gliding."

All content from Kiddle encyclopedia articles (including the article images and facts) can be freely used under Attribution-ShareAlike license, unless stated otherwise. Cite this article:
Angelina River Facts for Kids. Kiddle Encyclopedia.