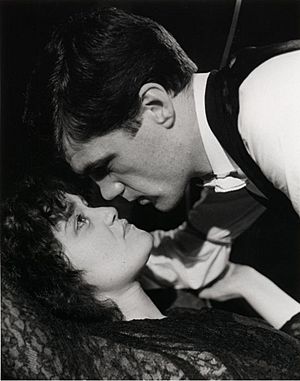 Further stage roles include Carmen in 'The Balcony' , Yvette in 'Mother Courage ' , Miriam in 'In the Bar of a Tokyo Hotel' , Lady Macbeth , Tatiana in Gorky`s 'Enemies'.

Work at London`s Theatro Technis under the name of Angeliki : Io in 'Prometheus Bound' , Myrrhine in 'Lysistrata', Paphlagoonia in the adaptation of Aristophanes 'The Knights' 'Oh Democracy', and Kyproula in 'The National Enganement', all directed by George Eugeniou.

At the British Library

", , whose attack on the practice of war could not— with South Atlantic news filling the front pages— have been more topical.." "The cast ..is made of experienced actors from all over the world and perhaps their very cosmopolitanism helps to bring new textures to a familiar dish ."

with Internationalist Theatre`s multi-racial cast "It opened with a satiety of womens` gossip. some of it not very easy to follow with the various accents of the New Internationalist Theatre. But it picked up wonderfully. The pleasures of the performance with its occasional songs based on ballads and tarantellas , lay in the village vitality, the lusty folk element. .and the children romped about deliciously. A very good evening of an unusual kind."

All content from Kiddle encyclopedia articles (including the article images and facts) can be freely used under Attribution-ShareAlike license, unless stated otherwise. Cite this article:
Angelique Rockas Facts for Kids. Kiddle Encyclopedia.