Anita Włodarczyk (Polish pronunciation: born 8 August 1985) is a Polish hammer thrower. She is the 2012 and 2016 Olympic champion, and the first and only woman in history to throw the hammer over 80 m; she currently holds the women's world record of 82.98 m. She is considered the greatest women’s hammer thrower of all time. 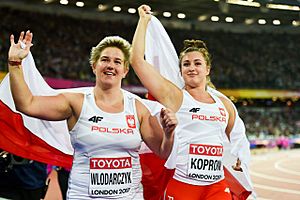 Włodarczyk (on the left) celebrating her gold medal of 2017 World Championships with team mate and bronze medalist Malwina Kopron.

Włodarczyk won her first national U23 championships in 2007, and went on to compete in the 2007 European Athletics U23 Championships, although she did not progress beyond the qualifying round. She finished sixth in the hammer throw competition at the 2008 Olympic Games.

Włodarczyk qualified for the 2008 World Athletics Final and won a bronze medal. The following year, she took part in the 2009 European Team Championships, winning her first gold medal at a major international competition.

Włodarczyk achieved a personal best throw of 76.20 metres (250.0 ft), achieved on 30 May 2009 in Biała Podlaska, beating her previous record by 81 cm and improve 76.59 m in Golden Spike Ostrava. Prior to the 2009 World Championships in Athletics, she produced a national record-breaking performance in Cottbus, winning the competition with a world-leading 77.20-metre (253.3 ft) throw. This was fourth longest throw by a woman in hammer throw.

On 22 August 2009, during the World Championships in Athletics in Berlin, Germany, Włodarczyk set a world record with a throw of 77.96 metres (255 ft 9 in). Her season ended prematurely when she twisted her left ankle during her celebration. Returning to competition at the Meeting Grand Prix IAAF de Dakar in April 2010, she easily won her event with a throw of 75.13 m. She then proceeded to break her existing world record with a 78.30-metre (256.9 ft) hammer throw at the Enea Cup in Bydgoszcz on 6 June 2010. She won the bronze at the 2010 European Athletics Championships and was ranked second overall for the season in the IAAF Hammer Throw Challenge, finishing behind Betty Heidler. She finished outside of the medals at the 2011 World Championships in Athletics, coming fifth overall.

In 2012, Włodarczyk finished third at the Ostrava Golden Spike and was the runner-up at the Prefontaine Classic. At the 2012 Summer Olympics, she won the silver medal with a throw of 77.60 m. On 11 October 2016, she was retroactively awarded gold after Russia's Tatyana Lysenko was stripped of the medal after testing positive in reanalysis of her stored doping samples.

In 2014, Włodarczyk won the European Championship with a throw of 78.76, which was a championship and national record.

On 15 August 2016 Włodarczyk won the gold medal at the Olympic Games in Rio, setting a new world record with a throw of 82.29 metres (270.0 ft). On 28 August 2016, she threw 82.98 metres (272.2 ft), setting a new world record just two weeks after the Olympics at the EAA 7th Kamila Skolimowska Memorial in Warsaw. In competition, Włodarczyk uses some of the equipment that belonged to the late Skolimowska, as a tribute to her fellow hammer thrower.

In 2017, she received Polish Sportspersonality of the Year Award for her sports achievements in the previous year. She finished the year with a 42 contests winning streak which began in July 2014.

For her sport achievements, she received:

Knight's Cross of the Order of Polonia Restituta (5th Class) in 2009.

All content from Kiddle encyclopedia articles (including the article images and facts) can be freely used under Attribution-ShareAlike license, unless stated otherwise. Cite this article:
Anita Włodarczyk Facts for Kids. Kiddle Encyclopedia.