Kids Encyclopedia Facts
In this article, the patronymic is Yuriyivna and the family name is Ushenina.

Ushenina lives in Kharkiv, where she was born. She is of Jewish ethnicity. Determined that the young Ushenina should develop intellectual and creative talents, her mother introduced her to chess at the age of seven, along with painting and music. She became the Ukrainian Girls' (under 20) champion at 15 years. Many of her chess skills have been self-taught, although in 2000–2002, she studied chess in the Kharkiv sports school of Olympic reserve. During this period, her coach was International Master Artiom Tsepotan. Afterwards she received more coaching at a specialist facility in Kramatorsk.

At the national Ukrainian Women's Championship, her progress and achievements have been noteworthy. In 2003 (Mykolaiv) and 2004 (Alushta), she finished in fourth and sixth places respectively, thereafter becoming the champion at Alushta in 2005, and outperforming top seed Tatjana Vasilevich along the way. She almost repeated this success at Odessa in 2006, finishing second, but ahead of the higher rated Natalia Zhukova and Inna Gaponenko. At these combined (men and women) events, she has defeated grandmasters of the calibre of Anton Korobov and Oleg Romanishin and in Ukraine was endowed with the title "Honored Master of Sports".

Her many successes in team chess reached an early pinnacle in 2006. At the Turin Women's Olympiad she was a part of the victorious Ukrainian team and remained undefeated throughout the contest. Ushenina and her compatriots Natalia Zhukova (also undefeated), Kateryna Lagno and Inna Gaponenko each scored between 70 and 80%, in what was a commanding performance, earning them team gold medals and much adulation in chess circles. In 2008, at the Dresden Olympiad, Ukraine's ladies took home the team silver medals, after failing to oust the powerful Georgian team from the top spot.

For Ushenina, her earliest major medal-winning performance occurred in Balatonlelle, at the European Team Championship for Girls (under 18) in 2002, where she took team gold and individual silver on board 1. On another occasion at the 2007 Women's World Team Chess Championship in Yekaterinburg, she helped Ukraine to a bronze medal finish and added an individual bronze to her tally. She has also played twice at the European Team Chess Championship, in 2005 and 2007. The team finished outside of the medal places each time, but for her personal performance, Ushenina took individual gold at the latter event, held in Heraklion, with 5/7.

A very active league chess player, she regularly plays in the national leagues of France, Russia, Serbia, Montenegro and Slovenia. 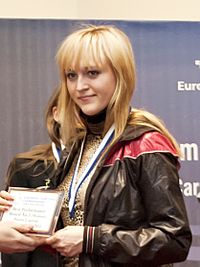 Tournament successes at Kiev in 2001 and Odessa in 2003, earned her the title Woman Grandmaster (WGM), awarded in 2003. Her performance at the 2006 Women's Chess Olympiad and subsequent results in Pardubice and Abu Dhabi in the same year then qualified her for the International Master (IM) title, awarded in January 2007.

In the 'A2' section of the prestigious Aeroflot Open in Moscow 2007, she scored 5 points from the first 7 rounds, defeating three male grandmasters for a part performance rating of 2672. In January 2008, she played in the Group C of the Corus Chess Tournament in Wijk aan Zee scoring 4½/13 points. Soon after, at the women's section of the Moscow Open, she took second place, behind Anna Muzychuk, and ahead of Natalia Zhukova and Kateryna Lagno. Later that year, at the Women's European Individual Chess Championship, held in Plovdiv, she took the bronze medal, losing out 1–2 to Viktorija Čmilytė in the playoffs for silver. In 2010, she won the Rector Cup in Kharkiv with a performance rating of 2649.

In 2016, she won the European Women's Championship in Mamaia, edging out on tie-break score Sabrina Vega, after both players had scored 8.5/11 points.

She won the silver medal in the second GM group at the 2017 Maccabiah Games in Israel.

In the final of the Women's World Chess Championship 2012 she achieved a tiebreak victory over Antoaneta Stefanova to become the 14th Women's World Chess Champion. This automatically entitled her to the title of grandmaster and also qualified her to the 2013 Chess World Cup. She is Ukraine's first women's world chess champion and thanks to this victory Ushenina was voted Ukraine's best female chess player of 2012.

She lost her title against Hou Yifan in the Women's World Chess Championship 2013.

All content from Kiddle encyclopedia articles (including the article images and facts) can be freely used under Attribution-ShareAlike license, unless stated otherwise. Cite this article:
Anna Ushenina Facts for Kids. Kiddle Encyclopedia.