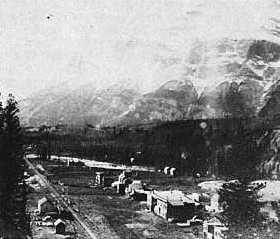 A picture of the mine site of Anthracite (foreground) and the townsite behind (left). Cascade Mountain looms in the background. The photograph was taken in 1895 from the nearby hoodoos. Photo courtesy of the Centennial Museum Society of Canmore.

Anthracite is a ghost town located within Banff National Park in southern Alberta, Canada. It is named after the anthracite variety of coal.

Anthracite existed from 1886 to 1904, during which time extensive coal mining operations were carried out by the Canadian Anthracite Coal Company in the surrounding Banff National Park, which is now a World Heritage Site as defined by the United Nations. The town was one of many that sprang up around the building sites of the Canadian Pacific Railway after workers accidentally stumbled upon some hot springs in nearby Banff. By 1887 the town's population had grown to 300 and most of the town's residents originated from the eastern United States. It consisted of one general store, one hardware store, one hotel, one pool hall, one restaurant and a barber shop. After much bad luck during the local mine's operation, the Canadian Anthracite Coal Company closed the mine in 1890. It was reopened the next year when W. H. McNeill agreed to finance the coal company, but after a series of floods and more bad luck, McNeill moved his operations to nearby Canmore. It was deserted in 1904 and in the 1930s mining in the surrounding region was banned by the government.

All content from Kiddle encyclopedia articles (including the article images and facts) can be freely used under Attribution-ShareAlike license, unless stated otherwise. Cite this article:
Anthracite, Alberta Facts for Kids. Kiddle Encyclopedia.