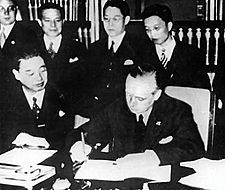 Signing of the pact

The Anti-Comintern Pact was a pact between Nazi Germany and the Empire of Japan, which would later joined by more countries, in Berlin, Germany, on November 25, 1936. It was set up directly against the Comintern, or Communist International, an organization that was led by the Soviet Union. On November 6, 1937, Fascist Italy joined the pact, which was the beginning of the Axis Powers.

All content from Kiddle encyclopedia articles (including the article images and facts) can be freely used under Attribution-ShareAlike license, unless stated otherwise. Cite this article:
Anti-Comintern Pact Facts for Kids. Kiddle Encyclopedia.