Aphananthe philippinensis is a common rainforest tree in the family Cannabaceae. In Australia it occurs from the Manning River in New South Wales to near Herberton in tropical Queensland. It was first described from the island of Luzon in the Philippines, hence the species name. The generic name of Aphananthe refers to insignificant flowers. This plant also occurs on the Solomon Islands and in Papua New Guinea

Growing to 35 metres tall and 85 cm in width, though usually seen as a smaller sized tree. The trunk is fluted and irregular in shape, buttressed at the base. The brown bark sheds irregularly; pustules and bumps give a patchy appearance. Branchlets are grey in colour with longitudinal cracks. 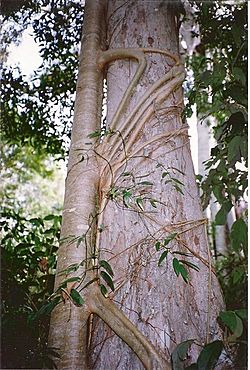 Native elm covered by a Moreton Bay fig and wombat berry vine, growing in a dry rainforest by the Richmond River, Australia

Leaves are alternate on the stem, hard, dry to touch and sandpapery, though easily snapped off and brittle. Prominently toothed with a sharp prickly point. Lanceolate in shape, 4 to 6 cm long, 1.5 to 3 cm wide. Green both sides, paler below. Leaves veiny on both sides; midrib, lateral and net veins visible. Midrib depressed on the upper surface, raised underneath. Midrib pale in colour under the leaf.

Male flowers form on small cymes. Female flowers on the same plant, being in singles or rarely two together, forming on a 5 mm long stalk. Male and female flowers around 5 mm long, in the months of September to November.

All content from Kiddle encyclopedia articles (including the article images and facts) can be freely used under Attribution-ShareAlike license, unless stated otherwise. Cite this article:
Aphananthe philippinensis Facts for Kids. Kiddle Encyclopedia.