Herberton is a rural town and locality in the Tablelands Region, Queensland, Australia. In the 2016 census, Herberton had a population of 855 people.

The first European exploration of this area was undertaken in 1875 by James Venture Mulligan. Mulligan was prospecting for gold, but instead found tin . The town of Herberton was established on 19 April 1880 by John Newell to exploit the tin find, and mining began on 9 May. By the September of that year, Herberton had a population of 300 men and 27 women. Herberton Post Office opened on 22 November 1880. In December 1881 a State School was established. 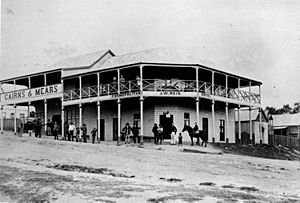 Cosmopolitan Hotel in Herberton in 1888

In the late 19th century the Mulligan Highway was carved through the hills from Herberton and passed through what is now Main Street, Atherton, before continuing down to Port Douglas. This road was used by the coaches of Cobb and Co to access Western Queensland.

At its apogee, Herberton was the richest tin mining field in Australia, and was home to 17 pubs, 2 local newspapers and a brewery.

Tin mining ceased in Herberton in 1978.

Herberton has a number of heritage-listed sites, including:

Herberton is notably drier than the area around Atherton with average rainfall for Herberton of 1,155 mm (45.5 in). Herberton is the most northerly location in Australia to have recorded a temperature at or below −5 °C (23 °F), and also the only location in Tropical North Queensland to have done so. The average minimum temperature ranges from 10 °C (50 °F) in winter to 18 °C (64 °F) in summer, while maximums range from 21 to 29 °C (70 to 84 °F).

The Herberton Mining Museum and Visitor Information Centre opened in 2005, and caters to the needs of the tourism industry. There are several caravan parks, hotels, motels and B&Bs located in the town. Herberton is the oldest town on the Atherton Tablelands and is often referred to as the Village in the Hills.

A Heritage Walk for tourists that takes in some of the old buildings and historical features of the town is a popular attraction. Herberton Historical Village is a 16-acre, re-creation of the town during the tin mining era, with exhibits such as vintage machinery, cars and Australian antiques. It has more than 50 restored period buildings.

Most recently, a Railway Museum has been established by volunteers in the former Herberton Railway Station building. This is operated by volunteers and only open part-time.

The Tepon Equestrian Grounds just out of Herberton have recently been upgraded with a large undercover pavilion for equestrian and other sporting events such as cycling and mountain biking. Local markets are held on the 3rd Sunday of every month at the Wondecla Oval.

For government secondary education to Year 12, the nearest school is Atherton State High School in Atherton to the north-east.

Notable people associated with Herberton include:

All content from Kiddle encyclopedia articles (including the article images and facts) can be freely used under Attribution-ShareAlike license, unless stated otherwise. Cite this article:
Herberton, Queensland Facts for Kids. Kiddle Encyclopedia.