Atherton is a rural town and locality in the Tablelands Region, Queensland, Australia. In the 2016 census, Atherton had a population of 7,331 people.

The town was named after John Atherton, a pioneer pastoralist who settled at Mareeba (then known as Emerald End) in 1875. The area was formerly known as Priors Pocket or Priors Creek.

Atherton Post Office opened by 1903 (a receiving office had been open since 1889). 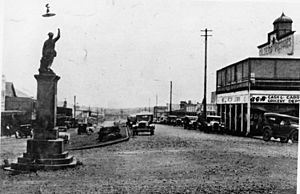 The Atherton War Memorial commemorates local residents who died in World War I. It was dedicated on 1 May 1924 by the Tinaroo Shire chairman, Frederick Grau. It is the only war memorial in Queensland of a digger in an animated pose.

The Atherton Courthouse was used as a wartime hospital for officers during World War II and has air raid bunkers beneath the building.

Atherton has a number of heritage-listed sites, including:

Atherton has a humid subtropical climate that differs from the surrounding tropical savannah climate due to the town's elevation high on the Atherton Plateau. Temperature extremes have ranged from 36.7 °C (98.1 °F) to –0.6 °C (30.9 °F). The average annual rainfall is 1,379.8 mm (54.3 in) 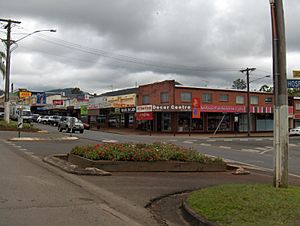 Atherton is joined by the Gillies Highway to Yungaburra, the Kennedy Highway north to Mareeba and south to Ravenshoe and Mount Garnet, the Malanda Road to Malanda and the Herberton Road to Herberton.

Trans North offers a number of return services during a seven-day week between Atherton, Tolga, Walkamin, Mareeba, Kuranda, and Cairns including drop-offs to airport, railway station, hospitals and bus depots. There are connections available between Ravenshoe and Herberton and along the Wheelbarrow Way to Chillagoe. There is an Atherton taxi service.

Each year towards the end of August, Atherton celebrates the Maize festival, which features a parade with decorated floats, the Maize Queen pageant, children's amusement rides and activities including tug of war and wood chopping. There are also shop window displays and artwork competitions, as well as a prize given to the best float.

The annual Atherton Agricultural Show is held in the second week of July at Atherton Show grounds including Heritage Listed Merriland Hall. The 'Atherton Show' is run by an army of volunteers of the (not-for-profit) Atherton Tableland Agricultural Society. Since 1904 the show brings together the values and aspirations of our community. It is a celebration of achievements ranging from the beauty of a delicate piece of embroidery to excellence in cattle breeding. There is also of course the fun of the rides and games in sideshow alley!

Due to its moderate climate, cooler and less humid than the tropical coast, and its booming agricultural industries, Atherton has a busy and prosperous community, and a vibrant social and cultural life. Atherton is very attractive to retirees and "tree changers" due to the cool climate, fertile garden soils, housing prices significantly lower than the nearby coastal city of Cairns, and the vibrant cultural life (live music, visual arts, theatre and sport).

The land around Atherton is used to grow a variety of crops, including sugar cane, peanuts, mangoes, maize (corn), potatoes, avocados, blueberries, blackberries, strawberries and macadamia nuts. Dairy and beef cattle are also reared in the area.

Atherton has a technical and further education (TAFE) campus, the Tropical North Institute of TAFE. There are also two day care centres in the town.

All content from Kiddle encyclopedia articles (including the article images and facts) can be freely used under Attribution-ShareAlike license, unless stated otherwise. Cite this article:
Atherton, Queensland Facts for Kids. Kiddle Encyclopedia.