Malanda is a town and locality on the Atherton Tableland in the Tablelands Region, Far North Queensland, Australia. In the 2011 census, Malanda had a population of 2,052 people. Malanda first developed in the 1900s after the discovery of tin and copper at Herberton saw a steady stream of miners and engineers moving over the mountains from the coast.

Malanda is located 85 kilometres (53 mi) from Cairns and 732 metres (2,402 ft) above sea level. The town is located downstream of the Malanda Falls on the North Johnstone River.

The name Malanda is synonymous throughout North Queensland with milk and cheese. Local promoters, noting that Malanda milk is sold in the Northern Territory and as far north as Weipa, declared Malanda to be 'the headquarters for one of the largest and longest milk runs in the world'. The milk is also exported to Indonesia and Malaysia. Malanda Milk is now a part of Dairy Farmers, but with a shorter milk run, only as far south as Mackay and as far north as Darwin.

In 1886 a decision was made to build a railway into the area but the problems of construction were enormous. Over 3,412 kilometres (2,120 mi) of railway was installed into the region in the next six years. By 1890 the Tablelands railway line had reached Kuranda. It pushed on to Mareeba in 1893 and Atherton in 1903 and did not reach Malanda until 1911. The line closed in 1964.

In 1908, James English (later the publican of the Malanda Hotel and father of Charles English) and James Emerson both moved into the area. Both saw the district's dairy potential. English brought cattle from Kiama and the Richmond River areas in New South Wales and Emerson had a herd of 1,026 cattle overlanded from Lismore. They took 16 months to reach Malanda and only 560 survived the journey. Despite this arduous start the industry grew and by 1919 Malanda had its own butter factory. In 1973 this amalgamated with the factory in Millaa Millaa to form the Atherton Tablelands Co-operative Dairy Association.

In 1910, in response to a developing local industry, John Prince established a sawmill in Malanda. It was from this mill that the boards for the Malanda Hotel (built in 1911) were sawn. Malanda Post Office opened by January 1912 (a receiving office had been open from 1911).

The northern entrance to the town passes the Malanda Falls. In comparison to the spectacular gorges of the escarpment the falls were created by the last flow of lava from the Malanda Shield Volcano with a cascade of only 4 meters. The town's swimming pool lies at the bottom of the falls. The name 'Malanda', according to some sources, was the local Aboriginal word meaning 'waterfalls'. 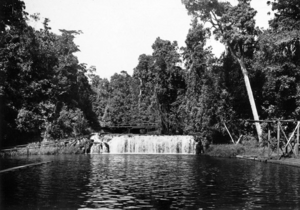 Malanda Falls and Swimming Pool, circa 1935

Malanda has a number of heritage-listed sites, including:

All content from Kiddle encyclopedia articles (including the article images and facts) can be freely used under Attribution-ShareAlike license, unless stated otherwise. Cite this article:
Malanda, Queensland Facts for Kids. Kiddle Encyclopedia.