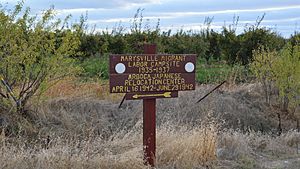 Arboga is an unincorporated community in Yuba County, California. It is located 3 miles (4.8 km), south of Olivehurst on the Sacramento Northern Railroad, at an elevation of 56 feet (17 m). It was named in 1911 by the pastor of the Mission Covenant Church of Sweden for his hometown of Arboga, Sweden.

During World War II, a temporary detention camp for Japanese Americans evicted from the West Coast by Executive Order 9066 was located here. The Marysville Assembly Center opened on May 8, 1942, and held 2,465 people before closing on June 29, when the residents were transferred to the more permanent and isolated concentration camp at Tule Lake, California.

All content from Kiddle encyclopedia articles (including the article images and facts) can be freely used under Attribution-ShareAlike license, unless stated otherwise. Cite this article:
Arboga, California Facts for Kids. Kiddle Encyclopedia.