The Archaeplastida (or kingdom Plantae sensu lato) are a major group of eukaryotes, comprising the photoautotrophic red algae (Rhodophyta), green algae, land plants, and the minor group glaucophytes. It also includes the non-photosynthetic lineage Rhodelphidia, a predatorial (eukaryotrophic) flagellate that is sister to the Rhodophyta, and probably the microscopic picozoans. The Archaeplastida have chloroplasts that are surrounded by two membranes, suggesting that they were acquired directly through a single endosymbiosis event by feeding on a cyanobacterium. All other groups which have chloroplasts, besides the amoeboid Paulinella chromatophora, have chloroplasts surrounded by three or four membranes, suggesting they were acquired secondarily from red or green algae. Unlike red and green algae, glaucophytes have never been involved in secondary endosymbiosis events.

The cells of the Archaeplastida typically lack centrioles and have mitochondria with flat cristae. They usually have a cell wall that contains cellulose, and food is stored in the form of starch. However, these characteristics are also shared with other eukaryotes. The main evidence that the Archaeplastida form a monophyletic group comes from genetic studies, which indicate their plastids probably had a single origin. This evidence is disputed. Based on the evidence to date, it is not possible to confirm or refute alternative evolutionary scenarios to a single primary endosymbiosis. Photosynthetic organisms with plastids of different origin (such as brown algae) do not belong to the Archaeplastida.

The archaeplastidans fall into two main evolutionary lines. The red algae are pigmented with chlorophyll a and phycobiliproteins, like most cyanobacteria, and accumulate starch outside the chloroplasts. The green algae and land plants – together known as Viridiplantae (Latin for "green plants") or Chloroplastida – are pigmented with chlorophylls a and b, but lack phycobiliproteins, and starch is accumulated inside the chloroplasts. The glaucophytes have typical cyanobacterial pigments, and are unusual in retaining a cell wall within their plastids (called cyanelles).

Archaeplastida should not be confused with the older and obsolete name Archiplastideae, which refers to cyanobacteria and other groups of bacteria.

The consensus in 2005, when the group consisting of the glaucophytes and red and green algae and land plants was named 'Archaeplastida', was that it was a clade, i.e. was monophyletic. Many studies published since then have provided evidence in agreement. Other studies, though, have suggested that the group is paraphyletic. To date, the situation appears unresolved, but a strong signal for Plantae (Archaeplastida) monophyly has been demonstrated in a recent study (with an enrichment of red algal genes). The assumption made here is that Archaeplastida is a valid clade.

Various names have been given to the group. Some authors have simply referred to the group as plants or Plantae. However, the name Plantae is ambiguous, since it has also been applied to less inclusive clades, such as Viridiplantae and embryophytes. To distinguish, the larger group is sometimes known as Plantae sensu lato ("plants in the broad sense").

To avoid ambiguity, other names have been proposed. Primoplantae, which appeared in 2004, seems to be the first new name suggested for this group. Another name applied to this node is Plastida, defined as the clade sharing "plastids of primary (direct prokaryote) origin [as] in Magnolia virginiana Linnaeus 1753".

Although many studies have suggested the Archaeplastida form a monophyletic group, a 2009 paper argues that they are in fact paraphyletic. The enrichment of novel red algal genes in a recent study demonstrates a strong signal for Plantae (Archaeplastida) monophyly and an equally strong signal of gene sharing history between the red/green algae and other lineages. This study provides insight on how rich mesophilic red algal gene data are crucial for testing controversial issues in eukaryote evolution and for understanding the complex patterns of gene inheritance in protists.

The name Archaeplastida was proposed in 2005 by a large international group of authors (Adl et al.), who aimed to produce a classification for the eukaryotes which took into account morphology, biochemistry, and phylogenetics, and which had "some stability in the near term." They rejected the use of formal taxonomic ranks in favour of a hierarchical arrangement where the clade names do not signify rank. Thus, the phylum name 'Glaucophyta' and the class name 'Rhodophyceae' appear at the same level in their classification. The divisions proposed for the Archaeplastida are shown below in both tabular and diagrammatic form. 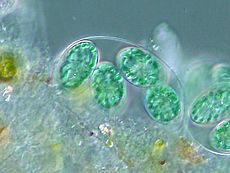 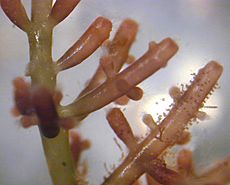 Red algae form one of the largest groups of algae. Most are seaweeds, being multicellular and marine. Their red colour comes from phycobiliproteins, used as accessory pigments in light capture for photosynthesis.

Chloroplastida is the term chosen by Adl et al. for the group made up of the green algae and land plants (embryophytes). Except where lost secondarily, all have chloroplasts without a peptidoglycan layer and lack phycobiliproteins. 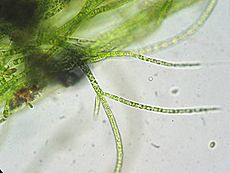 Charophyta sensu lato, as used by Adl et al., is a monophyletic group which is made up of some green algae, including the stoneworts (Charophyta sensu stricto), as well as the land plants (embryophytes).

Below is a consensus reconstruction of green algal relationships, mainly based on molecular data. While the Glaucophyta are typically figured as deepest rooting Archeaplastida, some genomic research points to Rhodophyta as basal, possibly with Cryptista and picozoa emerging in Archaeplastida.

However, there is a lot of contention near the Archaeplastida root, e.g. whether Glaucophyta or Rhodophyta are basal, or whether e.g. Cryptista emerged within the Archaeplastida. In 2014 a thorough review was published on these inconsistencies. The position of Telonemia and Picozoa are not clear. Also Hacrobia (Haptista + Cryptista) may be completely associated with the SAR clade. The SAR are often seen as eukaryote-eukaryote hybrids, contributing to the confusion in the genetic analyses. A sister of Gloeomargarita lithophora has been engulfed by an ancestor of the Archaeplastida, leading to the plastids which are living in permanent endosymbiosis in most of the descendent lineages. Because both Gloeomargarita and related cyanobacteria, in addition to the most primitive archaeplastids, all live in freshwater, it seems the Archaeplastida originated in freshwater, and only colonized the oceans in the late Proterozoic.

All archaeplastidans have plastids (chloroplasts) that carry out photosynthesis and are believed to be derived from endosymbiotic cyanobacteria. In glaucophytes, perhaps the most primitive members of the group, the chloroplast is called a cyanelle and shares several features with cyanobacteria, including a peptidoglycan cell wall, that are not retained in other members of the group. The resemblance of cyanelles to cyanobacteria supports the endosymbiotic theory.

The cells of most archaeplastidans have walls, commonly but not always made of cellulose.

The Archaeplastida vary widely in the degree of their cell organization, from isolated cells to filaments to colonies to multi-celled organisms. The earliest were unicellular, and many groups remain so today. Multicellularity evolved separately in several groups, including red algae, ulvophyte green algae, and in the green algae that gave rise to stoneworts and land plants.

Because the ancestral archaeplastidan is hypothesized to have acquired its chloroplasts directly by engulfing cyanobacteria, the event is known as a primary endosymbiosis (as reflected in the name chosen for the group 'Archaeplastida' i.e. 'ancient plastid'). One species of green algae, Cymbomonas tetramitiformis in the order Pyramimonadales, is a mixotroph and able to support itself through both phagotrophy and phototrophy. It is not yet known if this is a primitive trait and therefore defines the last common ancestor of Archaeplastida, which could explain how it obtained its chloroplasts, or if it is a trait regained by horizontal gene transfer.

Evidence for primary endosymbosis includes the presence of a double membrane around the chloroplasts; one membrane belonged to the bacterium, and the other to the eukaryote that captured it. Over time, many genes from the chloroplast have been transferred to the nucleus of the host cell. The presence of such genes in the nuclei of eukaryotes without chloroplasts suggests this transfer happened early in the evolution of the group.

Other eukaryotes with chloroplasts appear to have gained them by engulfing a single-celled archaeplastidan with its own bacterially-derived chloroplasts. Because these events involve endosymbiosis of cells that have their own endosymbionts, the process is called secondary endosymbiosis. The chloroplasts of such eukaryotes are typically surrounded by more than two membranes, reflecting a history of multiple engulfment. The chloroplasts of euglenids, chlorarachniophytes and a small group of dinoflagellates appear to be captured green algae, whereas those of the remaining photosynthetic eukaryotes, such as heterokont algae, cryptophytes, haptophytes, and dinoflagellates, appear to be captured red algae.

Perhaps the most ancient remains of Archaeplastida are putative red algae (Rafatazmia) within stromatolites in 1600 Ma (million years ago) rocks in India. Somewhat more recent are microfossils from the Roper group in northern Australia. The structure of these single-celled fossils resembles that of modern green algae. They date to the Mesoproterozoic Era, about 1500 to 1300 Ma. These fossils are consistent with a molecular clock study that calculated that this clade diverged about 1500 Ma. The oldest fossil that can be assigned to a specific modern group is the red alga Bangiomorpha, from 1200 Ma.

In the late Neoproterozoic Era, algal fossils became more numerous and diverse. Eventually, in the Paleozoic Era, plants emerged onto land, and have continued to flourish up to the present.

All content from Kiddle encyclopedia articles (including the article images and facts) can be freely used under Attribution-ShareAlike license, unless stated otherwise. Cite this article:
Archaeplastida Facts for Kids. Kiddle Encyclopedia.