Ardmore (Irish: Aird Mhór, meaning Great Height) is a seaside resort and fishing village in County Waterford, Ireland, not far from Youghal on the south coast of Ireland, with a population of around 330, although this varies with the tourist season. It is believed to be the oldest Christian settlement in Ireland. Saint Declan lived in the region at some time in the period 350–450 AD and Christianised the area before the coming of Saint Patrick.

In September 2014, Ardmore was included on a shortlist of Ireland's top tourist towns composed by Fáilte Ireland.

At the Synod of Rathbreasail in 1111, recognition was given to the Diocese of Ardmore, reputedly founded by Saint Declan, one of the Munster saints said to have preceded Saint Patrick in bringing Christianity to Ireland. He was regarded as a patron saint of the Déisi of East Munster. A bishop of Ardmore swore fealty to Henry II of England at Cashel, as a suffragan of its archbishop, in 1171. The last reference to an independent bishop of Ardmore dates to 1210, when Innocent III listed it as one of Cashel's eleven suffragan dioceses.

No longer a residential bishopric, Árd Mór is today listed by the Catholic Church as a titular see.

The parish, now called that of Ardmore and Grange, is in the Roman Catholic Diocese of Waterford and Lismore. St. Paul's, an old Church of Ireland church in the village, is part of the parish of Youghal.

On a hill above the village is a well-preserved 30-m-high, 12th-century round tower and the ruins of a Cathedral dating from the 12th and 13th centuries with an adjacent 8th century oratory. One of the outer walls of the Cathedral features some stone carvings retrieved from an earlier 9th-century building. The carvings include a very early image of a harp, images of Adam and Eve in the garden and a representation of "Solomon's judgement". The Cathedral also contains two Ogham stones, which rest in small alcoves. Some elements of the original structure can still be seen within the building. The present Church of Ireland church is close to this complex. 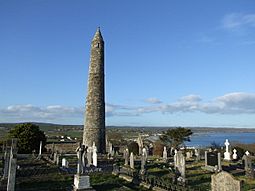 Round tower and ruins of St Declan's Church, Ardmore.

Within the last few decades, Ardmore has lost its status as a fishing village as fishing laws became more restrictive and the traditional way of life was given little consideration by the EU and national lawmakers. Vital harbour development remains unfunded and larger fishing vessels are unable to utilise the present docking facilities due to a lack of water depth. However, a small number of fishermen maintain some of the old fishing practices as they continue to fish from Ardmore.

The Samson, a crane ship, was wrecked on Ram Head, near the village, during a December storm in 1987 as it was being towed from Liverpool to Malta. Its wreck is now a popular diving spot. There are many other older wrecks in the bay area including the Marechal de Noailles, Bandon, Peri, Scotland, Sextusa and Peg Tranton, and more recently Anne Sophie and Fee des Ondes. The remaining keel of the latter wreck may still be seen at low tide on the main beach.

The village includes two hotels, a number of pubs and restaurants, a seasonal petrol station, a pier and slipway, and one store. There are also one or two sports clubs and a primary school. It boasts a mile-long beach, commonly termed the Main Beach, and several other beaches, such as Goat Island, Ballyquin, the Curragh, and Whiting Bay. Ardmore is a popular seaside resort, but has had difficulty maintaining its Blue Flag beach status due to an outdated sewage system (early works on updating the system commenced 2006) and modern farming practices which result in run-off from fields and subsequently into the bay, especially at the village end of the beach. Paradoxically, the absence of an adequate modern sewerage system has slowed down the pace of housing development in Ardmore compared with some other seaside villages in the southeast thus preserving much of its charm. Recently a new hotel was completed, replacing the older Cliff Hotel . In 1992 this village was the overall winner of the Irish Tidy Towns Competition.

There is a cliff path beginning near the Cliff House Hotel and ending back in the main street. The walk, which has marker posts erected along the route, passes an old remodelled Coastguard Station, St Declan's Cell and Holy Well, a ruined church, the wreck of the Samson, an abandoned coast guard lookout from 1939/45 and another, much older, lookout tower. Further along there is another well with stone canopy, known as Fr. O'Donnells Well. The Round Tower Complex is atop the hill above the village.

The Thurston family of writers were once owners of the house "Maycroft" and a plaque to this effect is mounted on the wall there. Some of their novels were set in places very similar to Ardmore. 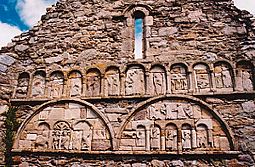 Ardmore is served on a daily basis by Bus Éireann route 260 which links it to, inter alia, Youghal, Midleton and Cork city. Until 2010 it was also served by route 362 which linked it to Waterford via Dungarvan.

All content from Kiddle encyclopedia articles (including the article images and facts) can be freely used under Attribution-ShareAlike license, unless stated otherwise. Cite this article:
Ardmore, County Waterford Facts for Kids. Kiddle Encyclopedia.