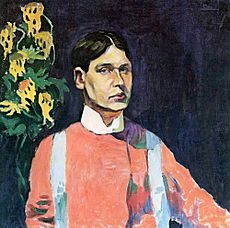 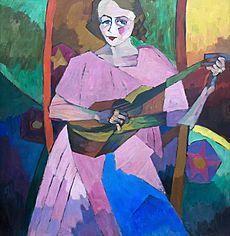 Aristarkh Lentulov (4 January 1882 – 15 April 1943) was a major Russian avant-garde artist who also worked on set designs for the theatre. His work shows strong influences of fauvism and cubism.

Aristarkh Lentulov was born in Penza Oblast, 625 kilometers (388 mi) southeast of Moscow, into the family of a country priest. He studied art in the Penza and Kiev art schools from 1897 to 1905. Then he went to the private studio of Dmitry Kardovsky in St Petersburg in 1906.

He lived in Moscow from 1909, and he was one of the founders of the avant-garde Jack of Diamonds group.

From 1910 to 1911 Lentulov studied at the Le Fauconnier studio and the La Palette Academy in Paris. While there, he met contemporary French painters such as Albert Gleizes, Jean Metzinger, Fernand Léger and Robert Delaunay. He took in the fauvists' and cubists' principles, and developed his own colourful style of painting. Later, after his return to Russia in 1912, he became a big influence on what became Russian futurism. Wassily Kandinsky and Kazimir Malevich were both influenced by him.

From pre-revolutionary times, Lentulov was actively involved in various theatrical projects. He designed sets for the Kamerny Theatre 1916) and for a production of Scriabin's Prometheus in the Bolshoi Theatre in 1919.

In 1928 Lentulov entered into the Society of Moscow artists, and became chairman of the Society. He also started teaching at the Russian State Art and Technical School.

Lentulov died in Moscow and is buried in the Vagankovo Cemetery.

All content from Kiddle encyclopedia articles (including the article images and facts) can be freely used under Attribution-ShareAlike license, unless stated otherwise. Cite this article:
Aristarkh Lentulov Facts for Kids. Kiddle Encyclopedia.