The Art Gallery was originally housed in the Jubilee Building with the State Museum and Library. The Jubilee Building, which was intended to be a public library only, was to be opened in honour of Queen Victoria's Golden Jubilee in 1887, but instead, only the first stone for the foundation was laid. The foundation stone was laid for the Art Gallery in July 1901 by the Duke of Cornwall and York, shortly after the federation of Australia. 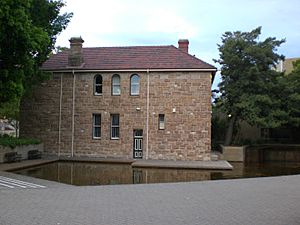 Centenary Gallery building, formerly the Police Courts, is linked to the main gallery.

The Main Gallery Building was built in 1977, and was also spurred by the mining boom. Western Australia was also placing more importance on cultural institutions, and the government was inspired by the upcoming 150th anniversary of federation in 1979. Construction of the Alexander Library began in the same period.

The architect of the main gallery building was Charles Sierakowski from the Public Works Department, who worked with engineer Philip Nadebaum and architectural company, Summerhayes and Associates. It was designed in the Bauhaus method with a Brutalist exterior, which was popular in European design. The slab and shear head column system was an innovative architectural feature in Western Australia at the time.

In 2017 AGWA announced plans to redevelop its sizable rooftop as focus for sculpture, events, restaurants, film etc in a project called AGWA Elevate” targeted for opening before the Gallery’s anniversary in 2020. The Government of Western Australia has pledged $10m towards this project. ‘Six Seasons” a high profile project to increase the focus on AGWA’s Indigenous collection was launched in 2017, and a new dedicated permanent Indigenous gallery was inaugurated alongside “Plain Speak” a special exhibit for the Perth International Arts Festival. 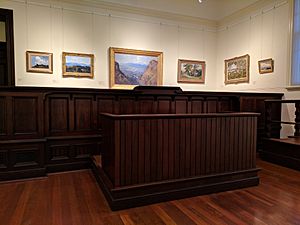 The Aesthetic Movement inspired aspects of the Art Gallery's collection.

Ongoing exhibitions include Indigenous traditional and contemporary art from the Northern Territory and Western Australia, and Western Australian art from the 1820s to 1960s alongside topical displays on key themes drawn from the collection. Desert River Sea is a major project exploring indigenous art. Desert River Sea: Kimberley Art Then and Now is a ground-breaking six-year visual arts initiative developed by the Art Gallery of Western Australia with funding support from the Rio Tinto Community Investment Fund. Its aim is to bridge the cultural and geographic distance between Aboriginal artists of the diverse Kimberley region, the Gallery in Perth and national and international audiences, thereby forging a network of cultural and artistic exchange and understanding. An annual exhibition called "Year 12 Perspectives" celebrated 25 years in 2017 and highlights works from Western Australian Art and Art and Design students, including paintings, prints, digital art, fashion, design, and sculpture. 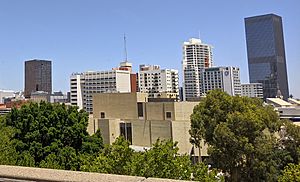 All content from Kiddle encyclopedia articles (including the article images and facts) can be freely used under Attribution-ShareAlike license, unless stated otherwise. Cite this article:
Art Gallery of Western Australia Facts for Kids. Kiddle Encyclopedia.