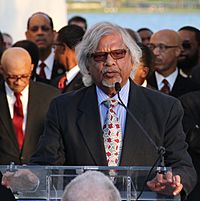 Arun Manilal Gandhi (born 1934) is an Indian-American socio-political activist. He was born in South Africa. He is the fifth grandson of Mohandas Gandhi. Gandhi considers himself to be a Hindu but expresses universalist views. Gandhi has worked closely with Christian priests and his philosophies are strongly influenced by Buddhist, Hindu, Muslim and Christian ideas. In 2003 Gandhi was one of the signatories to Humanism and Its Aspirations (Humanist Manifesto III).

All content from Kiddle encyclopedia articles (including the article images and facts) can be freely used under Attribution-ShareAlike license, unless stated otherwise. Cite this article:
Arun Manilal Gandhi Facts for Kids. Kiddle Encyclopedia.