Kids Encyclopedia Facts
This page is about the district of Bristol. For the stadium in Bristol, see Ashton Gate Stadium.

Ashton Gate is a suburb of Bristol, United Kingdom, in the Southville ward of Bristol City Council. A toll house at the western end of North Street still survives and indicates the origin of the area's name as a gate on the road to Ashton (now known as Long Ashton). Once part of the estate of the Smyth family of Ashton Court, the area had ironworks and collieries in the nineteenth century, also a tobacco factory and a brewery. There is still some manufacturing industry and retail parks and in 2003 the Bristol Beer Factory recommenced brewing in the former brewery site. Ashton Gate railway station closed in 1964. 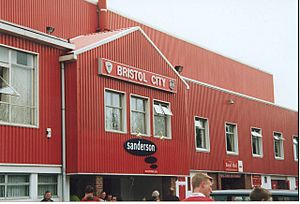 Whitemead House multi-storey council flats on Duckmoor Road, which overlook the Ashton Gate stadium, are notable for being the exterior filming location of the tower block where Delboy and Rodney lived in the BBC sitcom Only Fools and Horses; these flats were used as their home's exterior after 1988.

All content from Kiddle encyclopedia articles (including the article images and facts) can be freely used under Attribution-ShareAlike license, unless stated otherwise. Cite this article:
Ashton Gate, Bristol Facts for Kids. Kiddle Encyclopedia.