Bedminster is a district of Bristol, England, on the south side of the city. It is also the name of a council ward, which includes the central part of the district and some other areas. 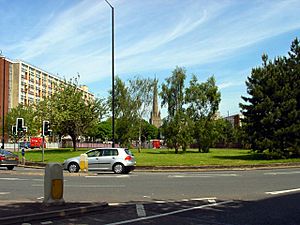 Bedminster was once a small town in Somerset. The town's origins seem to be Roman, centred on the present East Street and West Street. Finds here have been interpreted as an enclosed rural farmstead, dating between the 2nd and 4th centuries, but with possible Iron Age origins. The river Malago, which runs through Bedminster to join the Avon, was an early Christian place for baptisms — the old word for which, beydd may be the origin of Bedminster's name. Substantial Roman remains have also been found at Bedminster Down, including plaster, tesserae (hence mosaic floors), sandstone roof tiles, coins and pottery, hence the site is thought to be a Roman Villa occupied by the Romano-British.

By the late Anglo-Saxon period Bedminster was a manor held by King Edward the Confessor in the 11th century, and in the Domesday Book of 1086 was still in royal hands. The Royal Manor of Bedminster comprised all the land south of the Avon, from the Avon Gorge to Brislington, and in the Domesday Book had 25 villeins, 3 slaves and 27 smallholders. In 1154 it was given to the Lords of Berkeley, who kept it for 300 years. In 1605 it was purchased by the Smyth family of Ashton Court who remained the Lords of the Manor until the 19th century.

The parish of Bedminster was part of the hundred of Hartcliffe. 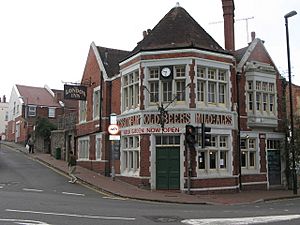 The London Inn, a landmark pub, is at the junction of Cannon Street, East Street and British Road

In 1644, during the English Civil War, Bedminster was sacked by Prince Rupert. When John Wesley preached there in the 1760s, it was a sprawling, decayed market town, with orchards next to brickworks, ropewalks and the beginnings of a mining industry.

Open cast coal mining had been done on a small scale since the 1670s, but in 1748 the first shafts were sunk by Sir Jarrit Smyth at South Liberty Lane. By the end of the century there were eighteen coal-pits operating in the Bedminster and Ashton Vale coalfield.

Between 1804 and 1809 the New Cut was excavated through the northern part of the parish from Temple Meads to Hotwells, providing a new course for the River Avon, enabling the original course to be held at a constant level so that shipping could stay afloat in Bristol Harbour, now known as the Floating Harbour. In addition to removing the tides, the new cut also helped with reducing silting in the harbour. It is now the boundary between Bedminster and the City centre.

In 1840 the shipbuilder Acramans, Morgan and Co began opened the Bedminster Yard on the New Cut, to build a number of steam ships including two large vessels for the Royal Mail Steam Packet Company, the 2,000 tonne Avon and Severn in 1842. In 1862 John Payne Ltd took over the yard, then known as the Vauxhall Yard, and continued to build coastal cargo ships, and small craft such as tugs. They closed in 1925, and the site was taken over by Bristol Metal Welding and Spraying Company, who are still in business there today. 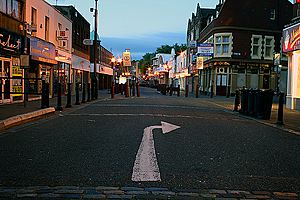 A nocturnal view along East Street

The population of Bedminster increased rapidly, from 3,000 in 1801 to 78,000 in 1884, mostly as a result of the coalfield and industries such as smelting, tanneries, glue-works, paint and glass factories. In the 1880s two major employers moved there – E. S. & A. Robinson (paper bag manufacturers) and W.D. & H.O. Wills (cigarette and cigar makers). The population overflowed to Windmill Hill, Totterdown, Southville, the Chessels and Bedminster Down. During this time, churches, public houses, shops and businesses were built, some of which still survive.

Victoria Park was laid out at the north of Bedminster in the late 1880s to provide recreational facilities for the new housing development.

In World War II, Bedminster was one of several areas of Bristol that were heavily bombed during the Bristol Blitz. Post-war town planning relocated most of the heavy industry to the rural areas to the south of the parish, and new estates grew up in Withywood, Hartcliffe and Highridge.

Bedminster, New Jersey, founded in 1710, was named after Bedminster in Bristol.

The two main shopping streets in Bedminster, East Street and West Street, form part of the A38 road, extending from Bedminster Bridge over the New Cut to Bedminster Down.

The Bristol to Exeter railway line passes through Bedminster, and there are two railway stations, Bedminster and Parson Street. The former Ashton Gate station used to serve the Ashton area and Bristol City F.C.

Bedminster is home to many sports teams, including Broad Plain Rugby Club, who play in the Bristol Combination league, and Bedminster Cricket Club, which was founded in 1847 and has historical links with W. G. Grace, who play in the West of England Premier League lower divisions.

Bedminster is home to one of Bristol's two city farms, below Windmill Hill, and also the national headquarters for the Federation of City Farms. Opposite the city farm is Bristol's Hackspace, a shared workshop for electronics and robotics hobbyists.

The Bedminster council ward elects two members of Bristol City Council. Celia Phipps and Mark Bradshaw are the current ward councillors, both of whom are members of the Labour Party.

Bedminster is part of the Bristol South constituency, whose MP is Karin Smyth of the Labour Party since 2015.

There is one Children's Nursery and five primary schools in Bedminster:

And one secondary school, Bedminster Down School.

All content from Kiddle encyclopedia articles (including the article images and facts) can be freely used under Attribution-ShareAlike license, unless stated otherwise. Cite this article:
Bedminster, Bristol Facts for Kids. Kiddle Encyclopedia.