Bishopsworth is the name of both a council ward of the city of Bristol in the United Kingdom, and a suburb of the city which lies within that ward. Bishopsworth contains many council estates.

As well as the suburb of Bishopsworth, the ward contains the areas of Bedminster Down, Highridge and Withywood. 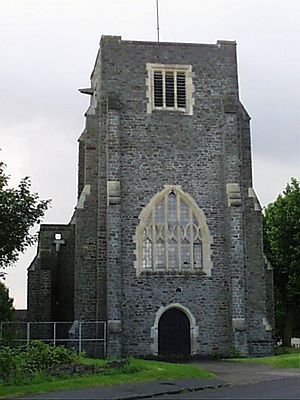 Bedminster Down is an area of Bristol, England. 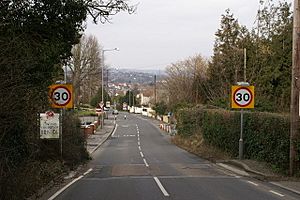 Withywood is a district of Bristol, England, situated on the southern border of the city, between Hartcliffe and Bishopsworth, just north of Dundry Hill.

It is a large estate, begun in the 1950s. The road links to Withywood are adequate, although they should improve with the proposed South Bristol Ring Road

Withywood has a number of primary schools: Fair Furlong, Four Acres, Merchants Academy (phase 1) and St. Pius. There is a secondary comprehensive on Molesworth Drive. There is a relatively new secondary school, Merchants Academy, which opening in 2008, after the demolition of the former Withywood Community School. All of the schools have relatively large sports fields and grounds (Merchants Academy has 2 astro turfs, along with an onsite gym, also open for the public). Withywood also has its own 'University', a private home on the corner of Bishport Avenue and Queens Road where studying and lectures take place. They have also been a registered charity since 1996.

Queen's Road has a number of shops and the Amelia Nutt Health Clinic. Four Acres road also has shops directly opposite Sherrin Way bus terminus (the end of the journey) next to 'The Rusham' retirement homes.

It has a number of public houses: The Woods (Four Acres, now demolished), Queens Head, Rising Sun (both located on Queen's Road – Rising Sun now shut down. Subsequently this too has now been demolished to make way for more housing) and the Elm Tree.

A big regeneration program is taking place around the area, new apartments on Hengrove Way and further development of The Junction shopping complex, and a proposal of a swimming pool and leisure complex alongside Cineworld, all within walking distance of Withywood. The Dundry View Neighbourhood Partnership works with residents in Bedminster Down, Bishopsworth, Hartcliffe, Headley Park, Highridge, Teyfant, Uplands, Whitchurch Park and Withywood.

All content from Kiddle encyclopedia articles (including the article images and facts) can be freely used under Attribution-ShareAlike license, unless stated otherwise. Cite this article:
Bishopsworth Facts for Kids. Kiddle Encyclopedia.