Aston Township is a township in Delaware County, Pennsylvania, United States. The population was 16,592 at the 2010 census.

Aston PA was first settled in 1682 as a municipality and was incorporated as a township in 1688 (one of the first townships in Pennsylvania). Prior to 1687, Aston was known as Northley; a ley is arable land used temporarily for hay or grazing. Edward Carter, who was the constable of the township, changed the name from Northley to Aston in remembrance of his old home of Aston in Oxfordshire, England.

In 1906, Aston became a first class township. The current boundaries of Aston were established in 1945 when the northwestern portion of the township seceded to form the borough of Chester Heights.

The following day three Hessian soldiers were convicted of plundering a local house. Two, selected by lot, were hung by the third soldier. David Glasgow Farragut frequented the Tavern as a young student in 1817. The Delaware County Odd Fellows were organized there in 1831 and during the 1920s the tavern became a speakeasy. The building was destroyed in 1949 and replaced by a gas station.

A new veterans memorial, dedicated to all veterans who lived in the township (and present-day Chester Heights prior to 1948) from the American Revolution to the present-day Operation Iraqi Freedom, along with Aston Township EMTs, police, and firefighters killed in the line of duty, has been built at the same intersection, opposite the former inn site. An unveiling ceremony occurred on November 11, 2006, with the formal dedication ceremony on April 28, 2007. 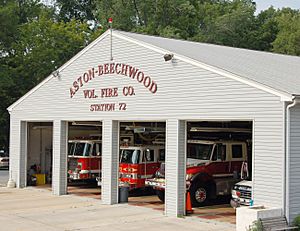 According to the United States Census Bureau, the township has a total area of 5.8 square miles (15.1 km2), all land. The township is covered by two ZIP codes: 19014 (Aston Post Office, which also covers parts of Upper Chichester and Bethel townships), and 19063 (Media).

Neumann University (est. 1965), a private co-educational Franciscan college located on the grounds of Our Lady of Angels Convent, is located in the northern portion of the township. Down the road from Neumann University is IceWorks Skating Complex, where the Neumann University Men's and Women's Ice Hockey teams play their home games. Neumann Men's Hockey won the NCAA Division III National Title in 2009, defeating Gustavus in the championship game 4-1 in Lake Placid, New York.

All content from Kiddle encyclopedia articles (including the article images and facts) can be freely used under Attribution-ShareAlike license, unless stated otherwise. Cite this article:
Aston Township, Delaware County, Pennsylvania Facts for Kids. Kiddle Encyclopedia.