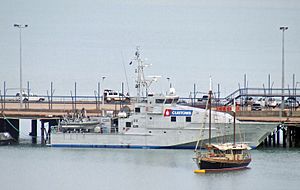 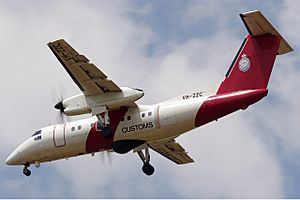 A Dash 8 aircraft of Australian Customs in Darwin (2010).

The Australian Customs and Border Protection Service is the Australian Federal Government agency with the duty of protecting the Australian border, helping with the movement of legal international travellers and goods, and collecting border related duties and taxes.

The Service has nearly 6,000 people working for it in Australia and other countries and is based in Canberra, Australia.

Protecting Australia by stopping illegal and possibly harmful goods, such as drugs and weapons, is a main concern and many methods and equipment are used to help with this task. This includes using intelligence, and computers, detector dogs, Smartgate, x-rays, Closed Circuit Television (CCTV) and other methods.

All content from Kiddle encyclopedia articles (including the article images and facts) can be freely used under Attribution-ShareAlike license, unless stated otherwise. Cite this article:
Australian Customs and Border Protection Service Facts for Kids. Kiddle Encyclopedia.