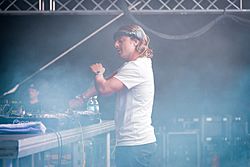 Sven Axel Christofer Hedfors (born 18 December 1977), better known under his stage name Axwell, is a Swedish DJ and record producer. He is a remixer and owner of Axtone Records. He is one third of what once was the Swedish House Mafia along with Sebastian Ingrosso and Steve Angello. In 2013 he was placed 19th on the DJ Magazine Top 100 DJ Poll.

All content from Kiddle encyclopedia articles (including the article images and facts) can be freely used under Attribution-ShareAlike license, unless stated otherwise. Cite this article:
Axwell Facts for Kids. Kiddle Encyclopedia.