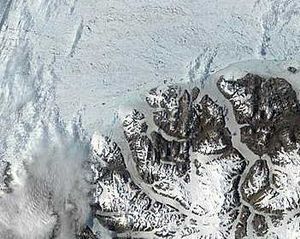 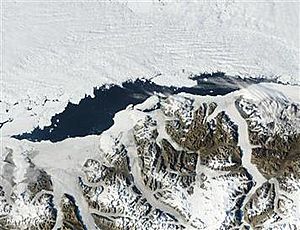 After: A NASA satellite image taken 13 August 2005 shows the collapse. The newly formed ice island forms only a small part of this picture, being the fragment very close to shore at the centre of the image. The island is ringed in the picture shown in this CBC article.

The Ayles Ice Shelf, like the nearby Mount Ayles, was named for the Arctic explorer, Adam Ayles, who served under George Nares as the Petty Officer of HMS Alert in the British Arctic Expedition. A 1986 survey of Canadian ice shelves found that 48 km2 (19 sq mi), a volume of 3.3 km3 (0.79 cu mi), of ice calved from the Milne and Ayles ice shelves between 1959 and 1974. Canada lost 94% of its overall ice shelf area between 1906 and 2015.

On August 13, 2005, the entire shelf broke clear from the coast of Ellesmere, forming a new ice island. It is believed to be the largest shelf breakup of its kind in Canada in over 30 years. The event was registered on seismometers in northern Canada, and it was also verified via satellite imagery.

The breakup occurred over less than an hour. The event was noticed by the Canadian Ice Service at the time that it occurred, but it took a further 16 months to fully reconstruct the breakup sequence from past satellite images captured by Moderate Resolution Imaging Spectroradiometer (MODIS), to determine the climatic conditions during the event, and for the event to garner public attention. The event, which has been linked to global warming, is similar to the 2002 breakup of the Larsen B Ice Shelf in Antarctica.

The freed segment of the ice shelf, known as Ayles Ice Island, drifted southwesterly for two years, and in January 2007 accelerated into the open Arctic Ocean, causing concern for oil rig operators in the Beaufort Sea north of Prudhoe Bay, Alaska. In August 2007, however, the island became wedged into the Sverdrup Inlet of the Queen Elizabeth Islands. Although scientists initially thought it was likely to remain there for some time, possibly permanently, it soon afterwards broke into two parts and resumed movement.

There is concern that the ice islands may become a hazard for ships and oil platforms.

While the formation of the Ayles Ice Island received widespread attention at the time due to the availability of satellite imagery and the ability of news media and scientists to visit the island, it was by no means unprecedented. On August 14, 1946, a U.S. Air Force patrol plane flying 480 km (300 mi) north of Point Barrow spotted an ice island, dubbed T-1, which was 24 by 29 km (15 by 18 mi). It was estimated to be from 62 to 488 m (204 to 1,600 ft) thick, with sides that rose from 9.1 to 61.0 m (30 to 200 ft) above the sea surface - much larger than the Ayles Ice Island. Over the following three years, it travelled around 2,400 km (1,500 mi) along the Beaufort Eddy, a slow-moving ocean current that flows eastward across the North Pole, then back west along the coast. In 1950, the U.S. Air Force 58th Reconnaissance Squadron was ordered to find T-1, and any other ice islands in the Arctic. In July, 1950, T-2 was found, a roughly rectangular ice island estimated to be 32 by 32 km (20 by 20 mi) by dimension. In 1947, a joint U.S.-Canadian expedition had noted and photographed a fresh water sea formation in the sea off Ellesmere Island. From a photographic examination of its ridges, T-2 was discovered to be the same ice island spotted off Ellesmere Island in 1947. Later in July 1950, the U.S. Air Force found Fletcher's Ice Island, or T-3, a kidney-shaped island, 14.5 by 7.2 km (9 by 4.5 mi). This was later occupied for brief periods in the early and mid-1950s. In August 1951, T-1 was relocated, nestled along the coast of Ellesmere Island. It is not known how long prior T-1, T-2, and T-3 had been formed, but it is believed they had calved from ice shelves on northern Ellesmere Island. There are an estimated 80 ice islands in Canada's High Arctic, most of them part of the pack ice that covers the region.

All content from Kiddle encyclopedia articles (including the article images and facts) can be freely used under Attribution-ShareAlike license, unless stated otherwise. Cite this article:
Ayles Ice Shelf Facts for Kids. Kiddle Encyclopedia.