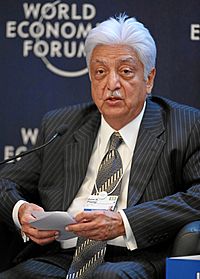 Azim Hashim Premji (born 24 July 1945) is an Indian businessman, investor, engineer, and philanthropist. He is the chairman of Wipro Limited. He is informally known as the Czar of the Indian IT Industry. He is a key figure in the software industry.

In 2010, he was voted among the 20 most powerful men in the world by Asiaweek. He has twice been listed among the 100 most influential people by TIME Magazine, once in 2004 and more recently in 2011.

He is currently the tenth richest person in India with a net worth of US$7.2 billion as of October 2019.

In 2013, he agreed to give away at least half of his wealth by signing The Giving Pledge. Premji started with a $2.2 billion donation to the Azim Premji Foundation, focused on education in India.

All content from Kiddle encyclopedia articles (including the article images and facts) can be freely used under Attribution-ShareAlike license, unless stated otherwise. Cite this article:
Azim Premji Facts for Kids. Kiddle Encyclopedia.