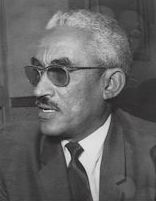 He held the position of Speaker of the Parliament from 1954 to 1957, and became Chief Judge in 1964. In 1966, he resigned from the court in protest of the government's refusal to reinstate the Sudanese Communist Party, which the court had held to be unconstitutionally banned from parliament. After 1972, he moved to Egypt, and later Dublin, Ireland, where he lived until his death. He turned 100 in March 2017.

Awadalla was the oldest living former head of state or government, a title he has held from the death of Đỗ Mười on 1 October 2018. Awadalla died on 17 January 2019 in Dublin, aged 101.

All content from Kiddle encyclopedia articles (including the article images and facts) can be freely used under Attribution-ShareAlike license, unless stated otherwise. Cite this article:
Babiker Awadalla Facts for Kids. Kiddle Encyclopedia.